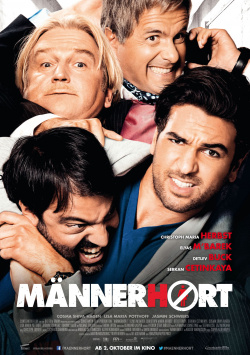 Endless long shopping, constant chatter and incessant nagging - software developer Eroll (Elyas M'Barek), porta-potty salesman Lars (Christoph Maria Herbst) and professional pilot Helmut (Detlev Buck) are simply tired of it. That's why they've joined forces to create the Männerhort, their very own fortress of masculinity in the middle of the central boiler room of a new housing estate in Frankfurt. Here they can still be real guys, watch football, burp, drink beer and eat chips as much and as long as they want. The perfect woman-free zone, which makes everyday life in a relationship much more bearable. But then the new facility manager Aykut (Serkan &Ccedil;etinkaya) discovers this sacred place and wants to force the three fellow sufferers to move out. But Eroll, Lars and Helmut don't want to let it come to that. After all, how are they supposed to think without their man cave? Can an unexpected discovery that Eroll makes in the shopping centre still prevent his expulsion from paradise?

Based on the stage success of the same name by Kristof Magnusson, Franziska Meyer Price (Berlin Berlin, Doctor's Diary) has staged a turbulent comedy in Frankfurt and the surrounding area with Männerhort (Men's Lair), which ensures good humour with a lot of irreverent humour and some hearty jokes. Christoph Maria Herbst in particular, who has already appeared in the stage version with Bastian Pastewka and Michael Kessler, has a lot of really good laughs to his name as the head macho of the nastiest kind. Admittedly, the level of the jokes is not particularly high, as most of them take place below the belt. But the amusing staging and the charming play of the actors ensure that even otherwise rather embarrassing toilet gags somehow seem really funny.

The film moves quite quickly away from the play in terms of content. While the play takes place in the basement of a shopping mall, where the men meet every Saturday while their wives indulge in shopping mania, the movie adaptation moves the whole thing to the central boiler room of a new housing estate, where the founders of the men's shelter live as neighbours. So they meet here not only to watch the Bundesliga together at the weekend, but whenever the ceiling falls on your head at home or the fair woman again only wants the one thing.

This relocation gives the story the opportunity to make fun of the new German bourgeoisie and individualism-free new housing estates. But also online shopping and especially an internet shoe provider get their fat here. This never really takes on satirical features and is far from being subversive. But this comedy about troubled city men is certainly amusing. The biggest plus point of Männerhort is undoubtedly the perfectly harmonizing interplay of the four main characters. In addition to a wonderfully ass Christoph Maria Herbst, the usual charismatic Elyas M`Barek, a very likeable Detlev Buck and YouTube star Serkan &Ccedil;etinkaya ensure that you also feel very comfortable as an audience member in this Männerhort.

So if you don't care much for highbrow humor and don't mind some raunchier gags, if you just want to be entertained and see likeable actors in a light, not always politically correct comedy, you can safely retreat to this man cave. Worth seeing!