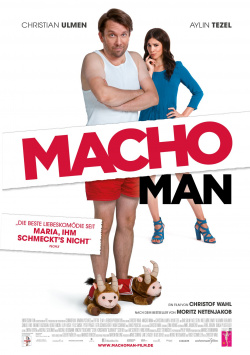 Daniel (Christian Ulmen) is in a real dilemma: although he believes he knows exactly what women really want. But unfortunately he can't come up with exactly those attributes. And so he has resigned himself to always being the good friend, but not the fiery lover, as a wimp and misogynist. This changes when he meets the beautiful Aylin (Alyin Tezel) on a club holiday in Turkey and falls head over heels in love with her. And for some reason, this dream girl seems to like him too. Heaven on earth, really - if it weren't for Aylin's family, in front of whom Daniel makes a complete fool of himself at their very first meeting. Now it's clear to him: if he wants to keep Aylin, he has to change. He has to become a real macho man. With the help of Aylin's brother Cem (Dar Salim) he wants to make the desired change. But what consequences this has for his relationship, Daniel has now really not expected.

With the novel Macho Man landed author, gag writer and comedian Moritz Netenjakob a real bestseller. And since comedies that play with common multi-culti clichés sell well, a film adaptation of the book was only a matter of time. Christian Ulmen was found as the perfect candidate for the leading role, who, at the latest since "Maria, ihm schmeckt`s nicht!", is very familiar with what happens when different cultures meet. Even if he plays a role as a wimp on his way to becoming a macho man, as we have seen from him (too) often, his acting still works very well. And Aylin Tezel, who already saved the very weak comedy Coming in from complete irrelevance with her charm, delivers another extremely likeable performance. There is good chemistry between the two, which at least makes the romantic aspect of the comedy successful and worth watching.

Also, some of the gags at least manage to generate a few light laughs from the viewer. But unfortunately, the film adaptation by award-winning cinematographer and co-director of Til Schweiger (Zweiohrküken, Kokowääh) Christof Wahl doesn't have much else to offer. The comedic potential of the book is stifled by an extremely clichéd and overly laboured production. For example, the title song, which is not exactly outstanding in terms of quality, is used in a completely over-inflated way, so that the audience is completely sick of it by halfway through the film at the latest. And the film also shows no originality whatsoever in the casting of the supporting roles. Nothing against Vedat Erincin, but there must be another actor who can give a tradition-conscious Turkish father. Erincin just played this role in 300 Words of German and has been seen in other German-Turkish comedies in a similar position.

The many culture clash gags that are attempted here, especially during Daniel's first encounter with Aylin's family, underline the lack of imagination that seems to be omnipresent here. Some nice visual gimmicks and the likeable main characters just aren't enough to console over this shortcoming. For all its good will, Macho Man can't be called a particularly good movie. There are hardly any visible ideas of its own here. Instead, every cliché, no matter how worn out, is used, so that the viewer always has the feeling to have seen a better version of this movie before. Unfortunately, that's only enough for one in the end: Only for hardcore Christian Ulmen fans just worth seeing!