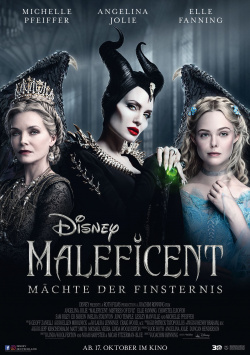 A few years have passed since the events that became immortalized as the fairy tale of Sleeping Beauty. Since then, Aurora (Elle Fanning) has been living in the realm of the moors. But her heart belongs to Prince Philip (Harris Dickinson) of the kingdom of Ulstead, who one day asks her to marry him. Aurora's mother Maleficent (Angelina Jolie) is not at all thrilled about this. And her reservations are not entirely unfounded, because behind her friendly facade, Queen Ingrith (Michelle Pfeiffer) is plotting a dark plan against the world of fairies. What was supposed to be a dream wedding quickly turns into a nightmarish war that also puts the bond between Aurora and Maleficent to the test.

Everyone knows the fairy tale of Sleeping Beauty, and most are probably also familiar with the 1959 Disney adaptation. The evil witch Malefiz - Maleficent in the original - made a particular impression here. In 2014, director Robert Stromberg asked himself what would have happened if Maleficent wasn't really evil at all, if the villain in this fairy tale was someone else entirely? That was the initial idea of Maleficent - The Dark Fairy, a visually stunning fantasy tale that managed to gross over $750 million worldwide despite some clear flaws.

With Maleficent: Powers of Darkness, the fairy tale is now being retold. Unfortunately, what I didn't like about the first film - most notably the three annoying fairies - again strikes me as a negative in the second film. In addition, the script is extremely unoriginal from set pieces of other films stolen together. One sequence, for example, is taken almost 1:1 from Avatar. No question, the film has some show values. And Angelina Jolie obviously enjoys this role, from which some scenes can clearly benefit. But overall, the whole thing comes across as very uninspired and does not exude any fantastic charm at all.

In addition, there is also too much of a discrepancy between very childlike aspects and moments where the whole thing is a very dark and brutal fantasy adventure that will absolutely terrify young children (hence the justified 12+ release). As a result, the film comes across as very indecisive, neither fish nor fowl. I'm not suggesting that Maleficent: Powers of Darkness is really bad. There are too many good moments for that. But the bottom line is that the film is very inconsequential and, although it's really big, not just in terms of budget, it feels absolutely insignificant. It becomes clear once again that great effects and fantasy action alone aren't strong enough to hide an extremely weak script. And then a strong Angelina Jolie doesn't help either. Only with cutbacks for big fans of part 1 worth seeing!

Cinema trailer for the movie "Maleficent 2: Powers of Darkness (USA 2019)"
Loading the player ...