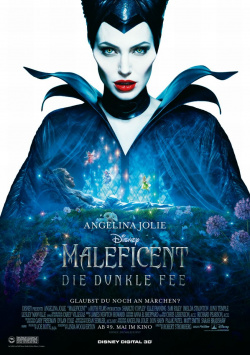 Everyone knows the fairy tale of Sleeping Beauty and also the Disney adaptation from 1959 should be known to most. The evil witch Malefiz - in the original Maleficent - left a special impression here. But what if Maleficent wasn't really evil at all, if the villain in this fairy tale was someone else entirely? That's the initial idea behind Maleficent - The Dark Fairy, a visually stunning 3D feature film adaptation of the beloved animated film.

As a young fairy, Maleficent (Angelina Jolie) grows up happily in the realm of the forest. Her friendship with the human boy Stefan could be a cornerstone for the long-awaited peace between the two hostile worlds. But over the years, Stefan (Sharlto Copley) changes. Greed for power and the throne of the kingdom drives him to betray Maleficent. Filled with anger and disappointment, Maleficent lets her dark side take over. When the king and his wife have a child, the dark fairy places a curse on little Aurora that will come true once the girl turns 16. Then Aurora (Elle Fanning) will prick herself on a spindle and fall into a death-like sleep from which she will never awaken. But over the years, Maleficent must realize, as she watches the girl grow up, that this curse may have been a mistake and that she has destroyed the last hope for peace.

Maleficent - The Dark Fairy is the directorial debut of Robert Stromberg, who has previously been primarily responsible for visual effects on major productions such as The Tribute to Panem and Pirates of the Caribbean. His debut as a director has become a decent fantasy adventure, which, however, has some weaknesses both dramaturgically and in terms of special effects. The idea to turn the well-known story completely upside down and to make King Stefan the actual villain is certainly very interesting. But at the same time it takes away a lot of the menace from a movie villain that has been loved and feared for generations. And it's precisely the dark side of Maleficent that Angelina Jolie executes so beautifully. Turning the fairy tale into a story about emancipation has its appeal, but the resulting potential is unfortunately only marginally exploited, especially by the overly mushy finale.

Another problem with the film is, of all things, the special effects. If the magical worlds are literally fantastically realized in some scenes, the backgrounds seem extremely artificial at other moments and seem taken straight from a Tinkerbell movie. Some creatures are reminiscent of more gritty fantasy adventures like Lord of the Rings, while other characters are too comically animated. All of this results in a less than harmonious overall picture that oscillates indecisively between pure children's film and darker fantasy spectacle. The fact that the German distributor has clearly opted for the child-friendly version and has lightened the film by just under a minute too dark material, can not really defuse this impression.

The biggest weakness - especially but not only in technical terms - are the three fairies Knotgrass, Flittle and Thistlewit. The three are really poorly realized in their diminutive fairy guises, and the artificially distorted voices, which take on Chipmunks proportions in Thistlewit true Alvin &, don't make things any more enjoyable. Much more could have been expected in this area from a director who has worked in visual effects for many years.

When Maleficent - The Dark Fairy works, the film succeeds really well. But in all the effort to do justice to the wonderful animated film and to transfer the typical Disney look to a live-action film, the whole thing has lost what made especially the early Disney films so special and successful: the magic! Stromberg's fairy tale version seems strangely sterile and despite many bright colors and magical creatures too cold to really penetrate to the heart of the audience. For whom some great moments with Angelina Jolie, a few spectacular effects and a good portion of kitsch already make up a great cinematic experience, will certainly be able to overlook the numerous weaknesses. But if you expect something special with a lot of charm and magic, you will probably be disappointed by this dark fairy. Therefore: only with some deductions worth seeing!

Cinema trailer for the movie "Maleficent - The Dark Fairy (USA 2014)"
Loading the player ...