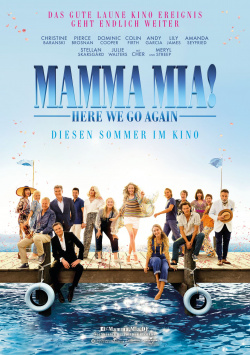 The music of ABBA is truly immortal. After the musical Mamma Mia! featuring the Swedish cult band's greatest hits became a huge success that continues to this day, the celebrity-studded big-screen adaptation also lured millions of fans to theaters. With worldwide box office takings of 600 million dollars, the musical romance is one of the most successful cinema musicals ever. Now, with Mamma Mia! Here we go again, the inevitable sequel is coming to cinemas. But since the story is actually more finished and strictly speaking was already too thin for a movie, let alone enough material for a sequel, part 2 simply goes back in time.

The frame story is the impending opening of the hotel Sophie (Amanda Seyfried) has built in memory of her mother Donna. But everything goes wrong: of her three possible fathers, only Sam (Pierce Brosnan) can make it to the party, her husband Sky (Dominic Cooper) is in New York and has been offered a job, and then a storm devastates the island. Luckily, memories of Donna and the summer she came to the Greek island as a young woman (Lily James) and met three wonderful men, one of whom gave her a very special gift, Sophie, help.

Okay, let's be real for once: Mamma Mia! Here we go again exists for one reason only - to make even more money off the songs of ABBA. The story of this sequel is a painstakingly cobbled together tapestry of plot scraps, although the flashbacks to the young Donna work really well in their own right. That's partly down to the rousing songs chosen for this second instalment, of course (though there is some overlap with the predecessor, despite the rather extensive ABBA repertoire), but also to lead actress Lily James. The actress known from Downton Abbey, Cinderella and Baby Driver exudes so much charm with a truly sunny disposition that she makes small dramaturgical weaknesses completely forgettable.

Even if the frame story set in the present, on the other hand, seems like a cramped attempt to reunite as many actors from the predecessor as possible, the film leaves a very positive overall impression in the end - at least for fans of the original. When lots of happy people sing and dance to Dancing Queen together in front of a gorgeous backdrop, you can't help but smile blissfully. Yes, it's extremely manipulative - as is a scene towards the end that will leave many with moist eyes - but it just works.

If you liked the first film, love the music of ABBA (two of the members also make brief guest appearances) and are just looking for a light holiday from the daily grind, this sequel can be warmly recommended. But if you're hoping for something like depth or a really original story, you might be bitterly disappointed. Therefore, there is the Absolutely worth seeing only with small restrictions!