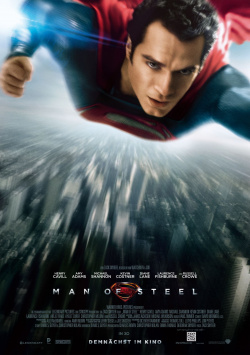 Is it a bird? Is it a plane? No, it's Superman! Again? Yes! Bryan Singer may have first tried to revive the franchise in theaters back in 2006 with Superman Returns, but he couldn't live up to the high expectations. And so now Watchmen director Zack Snyder, with the help of The Dark Knight team, is trying to help the Man of Steel soar to cinematic heights again. The odds of that happening aren't bad. Because although much of what is told in Man of Steel is already familiar from other cinematic and TV incarnations, Snyder does a surprisingly good job of blowing some fresh air under the cape of the somewhat dusty superhero.

So, at its core, the story isn't really new: after his home planet of Krypton explodes and he's sent off at the last moment by his parents (Russel Crowe & Ayelet Zurer) to Earth, Kal-El grows up there as Clark (Henry Cavill) with his adoptive parents Martha (Diane Lane) and Jonathan Kent (Kevin Costner). Even as a young boy, Clark always felt like he was different from the other kids, unaware that he was from another planet and had superpowers due to radiation from the sun on Earth. As a young man, he tries to learn more about his origins and his destiny. Although he goes completely underground to do so, moving from one place to another like a phantom, reporter Lois Lane (Amy Adams) gets on his trail. But even her boss Perry White (Laurence Fishburne), who otherwise always stands behind his star reporter, doesn't believe the crazy story about an alleged Superman. But any doubters are soon proven wrong when General Zod (Michael Shannon) and his confidante Faora (Antje Traue), other survivors of Krypton, show up to use Earth to resurrect Krypton and its people. Now it's up to Superman to decide where he belongs and use his powers for the right fight - the fight for his home.

Man of Steel, on the surface, really just presents familiar territory in a new guise. Already earlier films have shown the end of Krypton, already Christopher Reeve (in Superman II) and Tom Welling (in Smallville) had to fight against General Zod and also the way Clark Kent learned everything about an origin through a kind of hologram of his father Jor-El, was already implemented several times quite similar. So it was to be feared that a renewed film, which tells about the beginnings of Superman, could build up a certain kind of tension solely by its action sequences and special effects.

This is fortunately not the case with Man of Steel. Small but subtle changes in the familiar concept, such as when Clark and Lois Lane first meet, make the story itself interesting, as does the non-linear narrative style Snyder has chosen. Especially in the beginning, the action keeps jumping back and forth between Clark's childhood, current events, and the last days of Krypton. The mix of quieter, character-driven moments and more action-packed scenes works extremely well and prevents boredom from setting in for even a moment. Where Bryan Singer simply lingered too long and thus extremely slowed down the pace of his story, Snyder's style of staging ensures enough pace to keep even those viewers on their toes for whom the basic framework of the plot is not new.

The film can also benefit from its cast. While Henry Cavill remains a bit stiff overall, which comes with the territory of this role (he is, after all, the Man of Steel!), Amy Adams as a really good Lois Lane and Michael Shannon as a wonderfully crazy villain are particularly convincing. Kevin Costner and Russel Crowe only get to fill their father roles in a few brief moments. But both actors get everything they can out of their scenes in terms of emotionality and strength. Even smaller supporting roles, such as Antje Traue as Kryptonian battle-amazon Faora or Laurence Fishburne as a choleric editor-in-chief, are perfectly cast and make Man of Steel a real pleasure to watch, even in terms of acting.

The first 100 minutes of the film offer superhero action on a pleasingly high level. Special effects, story, actors and the music by Hans Zimmer - all can convince here. The last 40 minutes Snyder dedicates almost completely to the fight of Superman against General Zod. And he really lets it rip. This is dramaturgically gripping and technically first-class staged, but is unfortunately also a bit tiring in the long run. The extremely fast pace makes Man of Steel seem like Transformers on speed in these moments, smaller details threaten to get completely lost. Especially in the once again (almost) completely unnecessary 3D, the somewhat too sprawling orgy of destruction is just exhausting. Great to look at, but simply too much of a good thing. Here, a little less would have been more in any case.

But apart from that, Man of Steel can be considered a very successful reboot overall. Gritty and almost completely devoid of humor, while also far from the realism that permeated Christopher Nolan's Batman films, this Superman reboot is a great comic book adaptation in which the characters aren't completely slain by the action, at least at first, and which dramaturgically lays a solid foundation for (very likely) sequels. If you appreciate big fantasy adventures with lots of action, but also a decent character and story build-up, you'll definitely enjoy this new Superman. Absolutely worth seeing