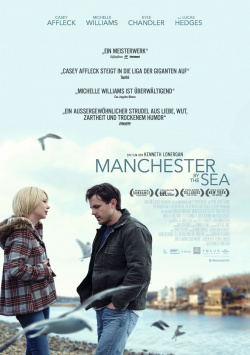 Manchester by the Sea

Lee Chandler (Casey Affleck) lives in seclusion in Boston, where he makes his living as a janitor. He is not a man of many words, rather uncomfortable with the company of others. That wasn't always the case. He used to have a modest but happy life with his ex-wife (Michelle Williams) in the small waterfront town of Manchester-by-the-Sea. When he receives word that his older brother (Kyle Chandler) has died, Lee must return to his old home. He is now the guardian for his 16-year-old nephew Patrick (Lucas Hedges) and must take care of his brother's business. Reluctantly, Lee accepts these duties, wanting to spend as little time here as possible. For the wound inflicted on his soul by a catastrophic accident here is far from healed, and it is impossible for Lee to find the peace here that he so desperately craves.

Manchester by the Sea is a great film: the story, in itself, consists of nothing but deadly sad and depressing elements. And yet director Kenneth Lonergan manages to give it an enormous lightness of touch by purposefully using very restrained, dry humour. On the one hand, this has the effect that the audience isn't completely dragged down after a few minutes and leaves the cinema with a solid depression. On the other hand, it also leads to the fact that the really emotional moments get an additional impact, which is of an extremely lasting intensity. As a result, the scene in which it is shown what tragedy has befallen the lives of Lee and his ex-wife is undoubtedly one of the most moving cinematic moments of recent years.

That the film manages to find its way back to (relative) lightness after this flashback is due to the director's sensibilities, as he so perfectly orchestrates the imagery, music and script together to create something quite wonderful. The superbly chosen ensemble of actors further enhances this. Especially the extremely strong performance of Casey Affleck, who was just awarded with a Golden Globe, leaves a lasting impression. But also Lucas Hedges and Michelle Williams - even if she is seen only relatively briefly - play quite great.

Manchester by the Sea is a great film about dealing with grief, a moving drama about guilt and forgiveness, and about the difficult journey back to life after a tragic loss. It's a deeply sad film at its core, yet one that exudes great hope and shouts a loud yes to life. If you appreciate subtle, quiet, yet entertaining cinema, this is not to be missed. Absolutely worth seeing

Cinema trailer for the movie "Manchester by the Sea (USA 2016)"
Loading the player ...