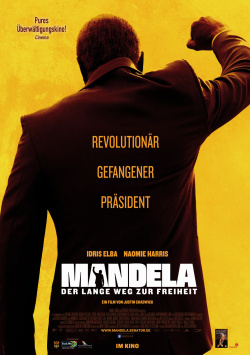 Mandela - The Long Road to Freedom

He was the embodiment of the anti-apartheid movement and a symbol of peace: Nelson Mandela, who died at the beginning of December, was an important and formative man not only for his country but for world politics as a whole. He showed the world how strong peaceful resistance can be and that human will can overcome many things when forgiveness triumphs over revenge. Based on Mandela's autobiography, director Justin Chadwick (The Queen's Sister) has directed this stirring portrait of a great man.

Mandela - The Long Walk to Freedom not only traces his resistance, which began when Mandela (Idris Elba) was a young lawyer in Johannesburg fighting for the rights of all black people. But that struggle seems hopeless. As Mandela becomes increasingly involved with the African National Congress ANC, demonstrating his great rhetorical talent, he quickly becomes a beacon of hope for the civil rights movement. But when he can no longer maintain his renunciation of violence and he goes underground with some henchmen, he becomes a dangerous terrorist for the authorities. In 1963 he finally ends up in prison with six of his comrades-in-arms, where no attempt is spared to break the will of the men. But they don't succeed - and three decades later, Nelson Mandela will finally make history after his release from prison.

Mandela - The Long Walk to Freedom focuses for long stretches less on Mandela's political involvement and more on the private side of his life, though this becomes less and less separable as time goes on. Justin Chadwick is visibly concerned with creating a cinematic memorial to Nelson Mandela the human being rather than the symbolic figure he has become, and in doing so once again highlights what he had to suffer for his ideals and the great legacy he leaves the world. These are lofty ambitions, and at least lead actor Idris Elba (Luther) absolutely lives up to them. His portrayal of this larger than life character is simply magnificent. Elba manages perfectly to capture the various nuances of Mandela and render it in such a way that it doesn't seem acted, but feels genuinely lived.

The other actors, most notably Naomie Harris as Winnie Mandela, also deliver performances that are beyond reproach. It is the actors, above all, who provide some very intense and stirring moments in the film. Unfortunately, the production itself can't quite keep up. The whole thing seems too much like a conventional biopic, which comes across a bit smooth in places and tries to create excessive sentimentality with its somewhat too intrusive film music, which the film wouldn't have needed at all. Because the biography of Nelson Mandela and the history of his country are moving enough that it would have needed such a musical support.

In the last third Chadwick can not prevent that some lengths arise and one has the feeling that a shortening of half an hour would have done the film very well. No question, Mandela - The Long Walk to Freedom is a good, in parts even very good film with many touching goosebump moments and great performances by the actors. But it's just not the outstanding film it could have been because of the story. And so it's primarily Idris Elba who leaves a lasting impression - something you would have wished for the rest of this biopic as well. Still, the bottom line is a very clear: Worth seeing!

Cinema trailer for the movie "Mandela - The Long Road to Freedom (USA 2013)"
Loading the player ...