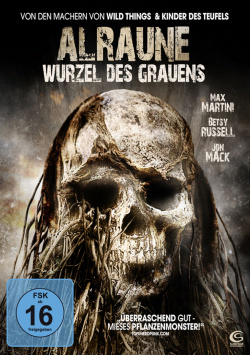 Film: The heavily wealthy Harry Vergas (Benito Martinez) sends a small expeditionary force into the South American jungle to search for a fabled dagger. Led by mercenary Darren McCall (Max Martini), the troupe, led by archaeologist Felicia (Betsy Russell), soon stumble upon the jeweled artifact. And although the dagger is protected in its ancestral place by a tribe of natives of the area, they manage to steal the valuable piece. but this has disastrous consequences, as the removal of the dagger awakens a monstrous plant creature, which begins a bloody hunt for the expedition team...

Alraune - Root of Horror is a production of the American SyFy channel. And this is known for producing trash of the particularly grotty kind with little money, unknown actors and harebrained stories. But every now and then the studio manages to produce a quite respectable genre work, which also includes the plant horror from 2010. Sure, the story is quite simple and stolen from various other films together. Whether it's Ruins, Predator or even a little touch of Indiana Jones, there's hardly a scene you haven't seen somewhere before (better). And yet, the B-movie has quite a respectable entertainment value, which is not only due to the atmospheric locations in the American state of Louisiana.

Also the actors, who are good by SyFy standards, ensure that the story could be implemented worth seeing. The well-known from the series The Unit Max Martini, Betsy Russell (SAW) or Benito Martinez (The Shield) deliver all no award-worthy performances, but act absolutely solid in the quite absurd events. In addition, some of the special effects can be seen, even if just the too obviously on the computer created "shock" effects then again underline the trash factor of the film.

Right thrilling or even scary is Alraune - Root of Terror not really. But the movie is still fun for long stretches, just because it doesn't try too hard to be more than decent B-movie entertainment. Those who expect a lot of blood and great effects will probably be disappointed. But if you are just looking for senseless plant horror with some very obvious genre borrowings, you can safely risk a look here.

Picture + Sound: For a cheaply made TV production, of course, you can not assume first-class picture and sound quality. But even if there are some small weaknesses to discover here and there, both the clean picture with a good overall sharpness and a coherent color scheme, as well as the sound with some good surround effects can please. Good!

Extras: As a bonus, there is only the trailer, as well as other program tips of the provider to see.

Conclusion: Mandrake - Root of Horror is, of course, outright nonsense. But who knows the film productions of the SyFy channel will have to admit that Tripp Reed's plant horror is well above the usual level and despite rather poor effects to show an acceptable entertainment and show value. If you like trashy B-movies, you'll get your money's worth thanks to the decent actors