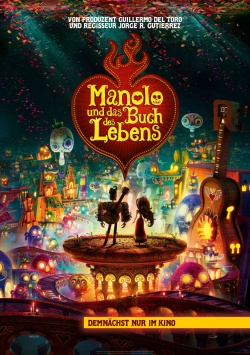 Manolo and the Book of Life

Manolo (voiced by Giovanni Zarrella) is supposed to carry on the family tradition and become a successful bullfighter. But he would actually much rather play the guitar and sing and thus conquer the heart of Maria (Pegah Ferydoni). But his best friend Joaquin also has it in for the beautiful Maria. A tricky situation that gets even more complicated when Maria has to leave her hometown. As the years pass, the lives of the two friends change. But one thing always remains constant: their determination to wait for Maria to return so they can vie for her favor. But when she finally returns, the battle for her heart becomes an essential struggle between good and evil, between the realms of the living and the dead - a battle in which Manolo has more to lose than Maria's love.

Manolo and the Book of Life is a matter of the heart for director Jorge R. Gutierrez and producer Guillermo Del Toro. It was important to the two to incorporate a great piece of Mexican folklore into the story and look of the film. The result was meant to be a visually powerful declaration of love for their country, its history and its sagas, while also being easily accessible to an international audience. The result takes some getting used to visually, but is extremely fascinating. Dramaturgically, on the other hand, an arguably conventional story is attempted here, which is further diluted by the unfortunately not at all successful dubbing.

While the ambitious look would have definitely deserved a better story. For the world that Gutierrez and Del Toro have conjured up on the screen is in almost all aspects quite different from anything seen in animated children's films of the recent past. Whether it's the wooden character look of the characters or the Latin American folk art inspired designs in the Land of the Remembered and the Land of the Forgotten, it all provides the viewer with countless little details that you can literally get lost in, especially in the good 3D version. In addition, the film is filled with small very quirky ideas - a pig squealing in probably the most unusual way in film history is just one of many examples - all of which make it clear with how much ingenuity, love and passion was worked on this animated adventure.

The fact that this is only reflected in the story to a limited extent is also negatively noticeable by the somewhat too extreme use of vocal interludes. In principle, the idea of presenting well-known songs in Latin American cover versions is not bad at all. But the realization is just terrible, especially in the German version. It already starts with the completely inconsistent choice of language: if the first song is still in the original English, the next songs are interpreted with a not very convincing fake accent, which then completely disappears in the last song. This is not exactly flattering for the songs of Elvis Presley, Radiohead, Rod Stewart or Mumford and Sons. It may be that Giovanni Zarrella is not a bad singer in principle. But he's just Italian, not a Mexican torero with a heart full of music - and you can hear that too clearly in his film accent.

Manolo and the Book of Life is one of those films you actually want to love, to appreciate the visual creativity and courage for the non-conformist look. But unfortunately this is made extremely difficult again and again, be it by the rather weak story, the disappointing dubbing or just the unconvincing songs. Here then applies: Ears close and through. Because only for the eye this fairy tale is really a feast. Overall, however, the following applies: Only with clear deductions worth seeing!

Cinema trailer for the movie "Manolo and the Book of Life (USA 2014)"
Loading the player ...