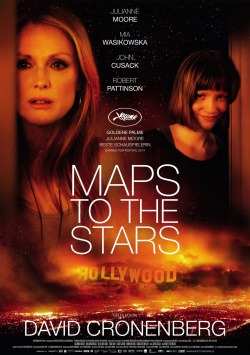 Maps to the Stars

Cesspool Hollywood: Aging actress Havana (Julianne Moore) would give anything to star in the remake of the film that made her late mother a legend. The fact that she keeps running into rejection from the studio drives her just as mad as the ghost of her mother that seems to haunt her. Close to insanity also seems to be her new assistant Agatha (Mia Wasikowska), who has just arrived in Hollywood. However, Havana has no idea what's really behind the burn scars marring the young woman's face and what she has to do with the family of her guru Stafford Weiss (John Cusack). The latter's youngest offspring, Benji (Evan Bird), has already gone through a bitter drug withdrawal at the age of thirteen and can't stand the idea of a young co-star stealing his thunder on the set of his new movie. When Benji is also increasingly plagued by visions, events escalate.

David Cronenberg is one of those filmmakers who likes to be called a cult director. Cronenberg has certainly earned that status with films like Scanners, Crash, The Fly, and A History of Violence. But one shouldn't make the mistake of automatically praising every work in the highest terms just because it comes from a supposed cult director. After all, Cronenberg's last films A Dark Desire and Cosmopolis in particular were far from flawless masterpieces. And Maps to the Stars is once again not a Cronenberg at his best, even if this time the quality is quite a bit better.

Whenever the film is a caustic and extremely biting satire on Hollywood, it works really well. Here, Cronenberg reveals a relentless sense of humor that is perfectly supported by the deliberately over-the-top acting of the cast. Julianne Moore in particular delivers quite a great performance here. The way she, as an actress on the verge of being sidelined, will try anything to get a very specific role is so wicked and cynical that it's just a whole lot of fun. But there are also many scenes that just seem inconsequential, strained to be whimsical, or a little too hysterical. At these moments, as a viewer, you keep wondering what the point of it all is, and you also definitely tend to look at your watch from time to time, bored.

Maps to the Stars deliberately makes it hard to be pigeonholed. Is the film a satire? A disturbing family drama? A psychological thriller with slightly supernatural excesses? Or perhaps a very non-conformist romance after all? One thing is for sure: David Cronenberg wants to challenge his audience, doesn't want to make it too easy for them to fathom his twisted maze of thoughts. That has its charm, but it also only works to a very limited extent. Because Maps to the Stars has, like Cosmopolis, the tendency to get on the audience's nerves between moments of absolute genius.

Who also liked the weaker films of David Cronenberg, who can get involved in the not always easy to understand narrative style and who wants to take a relentlessly evil look behind the scenes of the dream factory, should not miss this excellently cast film because of its many successful moments. But if you're expecting a straight satire or a gripping drama and were extremely annoyed by Cosmopolis, you'd better keep your hands off Maps to the Stars. Therefore we give it a: Worth seeing with some reservations

Cinema trailer for the movie "Maps to the Stars (USA/Kanada/Deutschland 2014)"
Loading the player ...