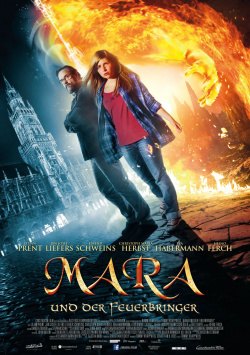 Mara and the Firebringer

It's bad enough that 14-year-old Mara (Lilian Prent) is an absolute outsider at school, constantly being teased and also having to deal with her mother's (Esther Schweins) esoteric spleens at home. To make matters worse, the girl is also haunted by disturbing nightmares that not only harass her at night. When Mara learns from a talking branch (voiced by Oliver Kalkofe) that the dreams are visions and that she is a seer destined to save the world from impending doom, she can finally say goodbye to a normal teenage life. With the help of mythology professor Dr. Reinhold Weissinger (Jan Josef Liefers), she wants to solve the mystery of her supposed destiny and stumbles into an adventure that spans time and dimensions, where the girl must rise far above herself to face the dangerous Firebringer and save the world...

With Mara and the Firebringer, Tommy Krappweis, former Saturday Night comedian and co-creator of Bernd das Brot, was able to fulfill a great dream. As director, he was able to film the first volume of his own fantasy trilogy and was able to draw not only on a prominent cast, but also on high-quality special effects. Just as it should be for a great fantasy adventure. With Billy Boyd even a real Hobbit makes a mini guest appearance. Two connoisseurs and fans of the books present at the press screening attested that the film version is very close to the original, which is not surprising when author and director are one and the same person. But does the passion that Krappweis has invested in the project and the closeness to the book automatically make Mara and the Firebringer a good film?

The answer to this is not quite so simple. Certainly, a fantasy film aimed primarily at teens 16 and under should not be judged or condemned by the same standards applied to similar films for more adult audiences. After all, it's a fact that children and teenagers are less bothered by overdrawn clichés - such as the portrayal of the awkward esoteric mom or the nasty school bitch - than adult viewers. Therefore, it wouldn't be fair to focus a review on just such points. Certainly, Mara flirting a little too much with her annoyed zero-buck-on-world-saving attitude often comes across as a walking stereotype of a teenager from an adult point of view. Lilian's Prent's performance, which does have a certain charm, is too weak to counter this rather one-dimensional drawing. But for young girls, she still provides a decent surface for identification. After all, even if not every girl has to hug trees, be constantly picked on stupidly at school or have to deal with Nordic-Germanic gods, the problems and fears that define Mara's life are still quite understandable.

Jan Josef Liefers is very well cast as the adventurous professor and Esther Schweins also manages to make her character seem very likeable in the end, despite the many enormously exhausting qualities. Only Christoph Maria Herbst is a bit difficult to take away from this rather serious role - even though he does a good job in one fight scene. So while the film is solidly realized on the acting level, it can fully convince on the visual level. The camera work is first class and also some of the effects, for which John P. Nuget (Matrix, The Lord of the Rings Trilogy) could be won, can be absolutely seen, especially for a German production. In many moments you can tell how much Tommy Krappweis loves the fantasy genre. And there one forgives him then also gladly sometimes the one or other cliché.

Even if Mara and the Firebringer is no masterpiece, nevertheless, at least young spectators, in particular, however, girls up to 16 years, and all who have already loved the books, should find pleasure in this adventure. And all fans are then also wished that the next two parts of the trilogy still make it in similar quality in the cinemas. Worth seeing

Cinema trailer for the movie "Mara and the Firebringer (Deutschland 2014)"
Loading the player ...