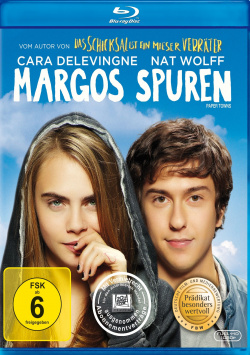 Film: As children Quentin (Nat Wolff) and the neighbour daughter Margo (Cara Delevigne) were inseparable friends. But then they drifted apart. While Quentin could only adore Margo from afar and spent time with his buddies Ben (Austin Abrams) and Radar (Justice Smith), she became one of the most popular girls at school. But one night Margo is about to graduate from Quentin's room and asks him to help her with a very special revenge action. For the reserved Quentin, who has never done anything illegal before, a more than adventurous night begins, in which his feelings for Margo are intensified once more. He's sure now that she's the one. But his feeling of happiness does not last, because Margo does not come to school the next day. She's disappeared and no one knows where she is. For Quentin it is clear: he has to find Margo and confess his love to her. All he has to do is follow the tracks she likes to leave behind. And that's the start of a last exciting road trip for Quentin and his friends on the stony road to adulthood - a journey that Quentin has already been destined to take. But Margo has always been good for a surprise…

After the great success of the film adaptation of John Green's bestseller "Das Schicksal ist ein mieser Verräter", the producers and screenwriters have now dedicated themselves to another work by the successful author. "Margo's Tracks", Green's third novel, is a charming coming-of-age story that uses a refreshing love story to observe three friends on their way to adulthood. Dramaturgically, the whole thing seems very constructed and the character of the mysterious puzzle lover Margo somewhat overdrawn. Moreover, the road trip of the friends is enriched with some unnecessarily rough jokes, which seem somewhat out of place in the otherwise rather reserved staging. But even though the emotional power of "Das Schicksal ist ein mieser Verräter" isn't nearly reached and the movie has a lot of ups and downs as well as some bumpy downs, it can be regarded as very well done.

It is such well observed and credibly implemented character developments that make "Margo's Tracks", despite all its weaknesses, a very good youth film that best serves its target group (primarily girls between 14 and 19 years). John Green seems to understand the young people he writes about as well as John Hughes ("Breakfast Club") once did in the 80s. And since those for whom this film is made are really well served, there is a deserved one for it: Worth seeing!

image + sound: There's nothing wrong with the technical implementation of Blu-ray. The very warm colour scheme, which gives the film its particularly captivating atmosphere, as well as the good sharpness of detail ensure that the visual implementation leaves an all-round positive impression. Not unusual for a film of this genre, the sound is rather reserved. Big surround moments shouldn't be expected. The dialogues and the soundtrack, however, are well coordinated, which is why there is also a satisfied "good" here.

Extras: The Blu-ray offers a very sympathetic audio commentary on the film by director Jake Schreier and novelist John Green, to which subtitles are also offered praiseworthy. In addition to the commentary, the disc also has four distant scenes with optional directing commentary (approx. 3:54 min.), as well as an alternative take of the scene in which the friends "singing fight their fear" (approx. 1:57 min.) to offer. This is followed by a multi-part look at the making of the film (approx. 21:09 min.), in which, for example, the path from the book to the film is traced or the author visits the shooting. Afterwards Green has talks with the actors Nat Wolff (ca. 8:04 min.) and a bored looking Cara Delevigne (ca. 5:15 min.), followed by some outtakes (ca. 3:08 min.).), the trailer, a picture gallery and four promo clips in which the participants talk about the shooting for almost 5 minutes while driving (so-called "Van Chats").

Fazit: "Margos Spuren" is not quite as moving as "Das Schicksal ist ein mieser Verräter". But for his target group, the film adaptation of John Green's bestseller is a successful youth film with humor, heart and a nice story. The Blu-ray presents the film in appealing picture and sound quality and also has some good extras to offer. But there is a very clear one: Recommendable!