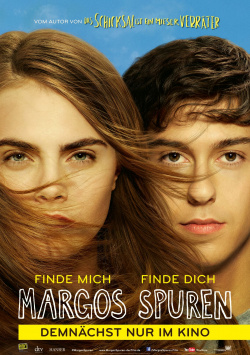 As kids, Quentin (Nat Wolff) and the neighbor's daughter Margo (Cara Delevigne) were inseparable friends. But then they grew apart. While Quentin could only idolize Margo from afar and spent time with his buddies Ben (Austin Abrams) and Radar (Justice Smith), she became one of the most popular girls at school. But on the verge of graduation, Margo shows up in Quentin's room one night and asks him to help her with a very special act of revenge. For the reserved Quentin, who has never done anything even remotely illegal before, a more than adventurous night begins in which his feelings for Margo are intensified once again. He is now quite sure: she is the one. But his happiness doesn't last, because the very next day Margo doesn't show up for school. She has disappeared and nobody knows where she is. For Quentin it is clear: he must find Margo and confess his love to her. All he has to do is follow the tracks she always likes to leave behind. And with that, Quentin and his friends embark on one last exciting road trip on the rocky road to adulthood - a journey whose outcome is already predetermined for Quentin. But Margo has always been good for a surprise...

Following the huge success of the film adaptation of John Green's bestselling novel Fate is a Lousy Traitor, the producers and screenwriters have now turned their attention to another of the bestselling author's works. Margo's Footsteps, Green's third novel, is a charming coming-of-age story that uses a refreshing love story to watch three friends on the road to adulthood. Dramaturgically, it does feel contrived and the character of Margo, a mysterious puzzle-lover, a bit too overdrawn. Moreover, the road trip of the friends is enriched with some unnecessarily crude gags, which somehow seem out of place in the otherwise rather restrained production. But even though the emotional power of Fate is a Mean Traitor is not nearly reached and the film has some bumpy lows as well as many highs, overall it can be considered extremely successful.

This is partly due to the good template. The story, although as said it seems a bit contrived, is simply very nice, especially since the resolution is pleasingly true to life and deviates from the audience's expectations. Also, the good interplay of engaging images and catchy soundtrack ensures that not only younger viewers will find access to the story and for that gladly overlook the small weaknesses. The film's greatest strength, however, is its cast. Even if the marketing is primarily tailored to It-Girl Cara Delevigne, Nat Wolff is clearly the star of the film. Wolff, who already stole the show from his co-stars in his small role in Fate Is a Lousy Traitor, is utterly convincing as a teenager in love who just won't accept that the world changes once you grow up. He loves Margo and the memories of a happy childhood he shares with her. Then, as he searches for Margo, he realizes how much his best friends' lives change as they get involved rather than chasing an unattainable dream. And to this, Quentin reacts just as a young person hopelessly in love with an ideal would.

It is such well-observed and believably realized character development that makes Margo's Footsteps, for all its flaws, a very good youth film that serves its target audience (primarily girls between 14 and 19) very well. John Green seems to understand the young people he writes about as well as John Hughes (Breakfast Club) once did in the 80s. And since those for whom this film is made are really well served, the bottom line is: Worth seeing!