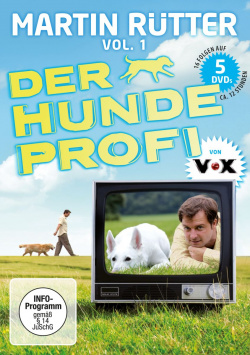 Content: Whether the dog yelps constantly, does not hear, is afraid of everything or snaps at other dogs, one man is the perfect contact for such problems since 2008: Martin Rütter. The "Dog pro", who has been taking care of dogs and their owners since 1995, has so far solved over 70 cases on VOX involving small and large four-legged friends. Again and again it becomes clear. The problem is usually not the dogs, but the owners! With a great deal of expertise, empathy and charm, Rütter always succeeds in finding solutions to even the most difficult problems. His distinctive style also make him so popular with TV viewers, who now have the opportunity to experience the best cases from "Der Hundeprofi" over and over again on DVD.

So dog lovers can watch Rütter, for example, as he takes care of the huge, extremely lovable Caesar, who seems to lack any form of respect for his masters, which manifests itself in the fact that he eats everything that is near his muzzle - and that is almost everywhere in the apartment. Or how he tries to calm down Henry the pug, who howls all over his mistress' ears, especially when she's driving. Rütter also visits the Labrador dog Fanny, who frightens a young family including offspring with her lack of manners and has to be locked in a cage again and again. Using the example of the Yorkshire mongrel Paul, he shows that the love of a dog for its owner can also have its negative sides. Or he tries to help dogs and their owners when it comes to dealing with a traumatic experience, as in the case of the French bulldog Kung Fu, who is afraid to go for a walk after being attacked by another dog and his master - which also applies to his mistress.

A total of 32 cases from three seasons are offered in this five-DVD set, which is sometimes funny, sometimes educational, and occasionally downright moving. Rütter, who has also been successfully touring Germany for some time with his live tour "Hund-Deutsch, Deutsch-Hund", treats dogs and owners alike with respect, taking all problems seriously, even if he is deliciously amused by some behaviour. He helps but never lectures or condescends, and that is what makes him so likeable. Entertaining, humorous and instructive - all this makes this DVD box with twelve hours of material a real must for all dog lovers!

Picture + Sound: Since only a data-reduced press sample was available for testing, no rating can be given here about the final technical implementation. But since the quality of the check disc is on a good TV level, it can be assumed that the purchase version also comes in decent picture and sound quality in the trade.

Extras: The 5 DVD box set has no extras to offer.

Conclusion: "Der Hundeprofi" is not without reason one of the most successful documentary series on television. Martin Rütter understands perfectly to get involved in the problems of dogs and their owners and always finds the right solution even in difficult cases. The DVD box set offers fans of the VOX series twelve hours of the best contributions from three seasons. A truly animal pleasure!