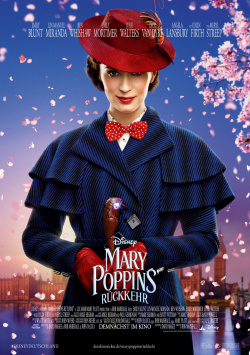 London in the 1930s: It's been a long time since the magical nanny Mary Poppins flew into the Banks family's lives. Now Michael (Ben Whishaw) and his sister Jane (Emily Mortimer) are grown up themselves, and Michael lives with his three children in his parents' house. But that is now in danger of being taken away from him, as he can't pay back the loan he took out with the bank he works for. For Michael, who has only recently lost his wife, a world is collapsing. But just when the last spark of hope seems to have been extinguished, Mary Poppins (Emily Blunt) reappears.

It has taken a full 54 years to direct a sequel to the immortal Disney classic, Mary Poppins` Return. Rob Marshall (Chicago, Into the Woods) has taken on the difficult task of directing a film that does justice to the classic, cherished by generations of fans, while bringing new sides of its own to the magical nanny character dreamed up by P. L. Travers. It's almost a miracle that it can be said: Rob Marshall has met this challenge with flying colors.

The Return of Mary Poppins is a wonderful film full of magic, great songs, funny ideas and a whole lot of heart. Sure, the story is strictly just a variation on the story of the first film. But the screenplay by David Magee (Life of Pi - Shipwrecked with Tiger) breathes enough life of its own into the whole thing that the film hasn't become a mere nostalgia number revue. The fact that the sequel also sticks closely to the original in terms of style after all these years - a classic cartoon sequence included - is a positive in every respect.

But the film's really big strength is a drop-dead-good Emily Blunt. She manages quite wonderfully to play herself out of the oversized shadow of Julie Andrews. The fact that she can also sing really well is just the icing on the cake of a performance that with its many little nuances deserves at least an Oscar nomination. But also the other actors like musical superstar Lin-Manuel Miranda, a wonderfully smarmy Colin Firth or even Ben Whishaw as a grieving widower make sure that Mary Poppins` return has what it takes to become a classic, just like the original.

A beautiful film that makes its audience laugh but also cry, that leaves you happy and with a song on your lips. A film that allows its audience to dream and hope for the good in people. Despite small weaknesses in the B grade - so the guest appearance of Meryl Streep is amusing, but strictly unnecessary and a big musical number in the last act is a little too much of a good thing with too modern-looking bicycle tricks - a very great cinema fairy tale and therefore also: absolutely worth seeing!