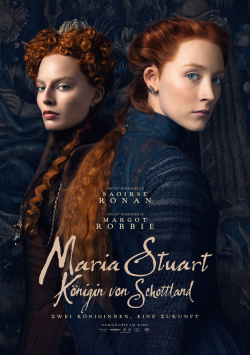 When Catholic Mary Stuart (Saoirse Ronan) returns to Scotland from exile in France to stake her claim to the throne, Protestant Queen Elizabeth I (Margot Robbie) sees her as a threat to her entire reign. But instead of following the advice of her advisors and executing Mary Stuart, the queen tries to solve the problem diplomatically. But Mary Stuart is not so easily fobbed off. She insists on her right of inheritance and doesn't see why she should have to marry someone she doesn't love only to be fobbed off with a small piece of the pie. This rivalry drags on for years, until suspicions arise that Maria is plotting to assassinate the queen in order to take the throne. Now it seems the time has come for Elizabeth I to no longer hold her protective hand over Mary Stuart.

Mary Stuart, Queen of Scots, the feature film debut of theater director Josie Rourke, leaves a somewhat ambivalent impression. On the one hand, the film is very strongly acted and also has a visual appeal achieved through mesmerizing landscape shots and an atmospheric set. On the other hand, the story drags badly and literally feels too undercooked and theatrical to allow a real emotional connection to develop between the protagonists and the audience.

Also, the feminist approach of the production is a bit too intrusive. It would have been enough to draw two strong female characters. To have them also constantly saying how bad, power-hungry and conniving men are just comes across as annoying in the long run - which wasn't just me as a man. Overall, it has to be said that Rourke doesn't seem to be a friend of subtle storytelling, as evidenced in no small part by the grossly overdone makeup Margot Robbie is hidden under in the final act.

Besides that, though, the historical drama has plenty of strong moments. However, these are too often robbed of their real power by some unnecessary lengths. Told a little tighter, this story could have been absolutely captivating and enthralling. Because the prerequisites for that aren't given by the two great leading actresses alone. But as it is, the whole thing is too tough and bloated to leave a lasting impression. In the end it's only enough for a "worth seeing": Worth watching with some reservations