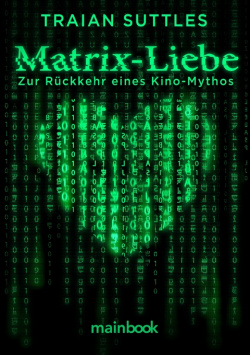 < Matrix-Liebe - A book celebrates the return of a cinema myth

If all goes well, a new film in the "Matrix" series will be coming to our cinemas in about a year's time. At the end of 2021, the work, which is currently being filmed in Berlin under strict hygienic conditions, will flicker across the screens. Keanu Reeves promises that fans will once again expect revolution. Lana Wachowski has taken over the direction and also wrote the script together with David Mitchell ("Cloud Atlas") and Aleksandar Hemon ("Sense8"). And exactly this script should be decisive for whether "Matrix 4" will work or not. In fact, the story was finished with "The Matrix Revolutions" 17 years ago (some may even claim that the ending is ideally that of part 1).

straight part 2 and also part 3 are often criticized very harshly (in some aspects quite rightly), but nevertheless part 1 is still strong enough, even more than two decades after its cinema release, to keep up the myth of the series - and to make for a certain amount of anticipation for part 4. If you want to celebrate this anticipation properly, the book "Matrix-Liebe" by Traian Suttles (schienen im mainbook Verlag) is highly recommended. Suttles, who has already devoted himself extensively to the topic of Sherlock Holmes in his book "Drogenrausch du Deduktion", takes no less thorough a look at the three previous "Matrix" films. No detail, no matter how small, seems to escape his attention, which leads to the fact that as a simple viewer of the films one suddenly sees the trilogy with completely different eyes.

The book is factually written, but nevertheless passionately. Suttles deals with the formative moments, which were revolutionary for the time, as well as with scenes that have brought about rather negative reviews. He manages to show very well that "Matrix" did not only write film history because of the first part, but as a whole construct. I myself have seen all three parts several times, plus numerous documentaries of the big DVD box and have also listened to various audio commentaries. Nevertheless, this book managed to make me discover many new facets of the series and allowed me to think about some scenes in a completely new way.

And so, by reading the book, the conviction that a fourth part is not a particularly good idea has actually dissipated and has given way to a solid anticipation. If you want to shorten the waiting time for the new chapter in the "Matrix", you don't have to take a red pill, you just have to resort to this very readable analysis of the movies!

You can order the book HERE.