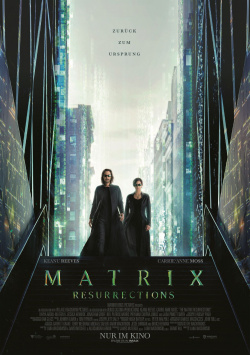 Neo (Keanu Reeves) and Trinity (Carrie Ann Moss) are back! But wait - hadn't Neo sacrificed himself at the end of "Matrix Revolutions" and hadn't Trinity died? Well, in the world of "Matrix" everything is possible - even resurrection. I don't want to tell much about the content of the fourth part "Matrix Resurrections", because on the one hand there are a lot of direct quotes from the first three movies and what is really new is the most surprising thing about the movie. Therefore, I approach my review this time a little differently than usual.

Quite clearly. Anyone who doesn't know the original trilogy will be hopelessly lost here. On the other hand, all connoisseurs of the first films are also repeatedly put to a hard test of patience, as they are repeatedly presented with familiar film clips that are supposed to show that everything is somehow repeated - and yet completely different. In principle, that's not a bad idea. The extreme meta-approach that this late sequel follows, especially in the first half, also has a few good approaches. But in the end the whole thing just doesn't really want to work.

For me "Matrix Resurrections" is like the remix of a beloved song. You keep recognizing the set pieces you like, but can't quite get comfortable with the new elements. Director Lana Wachwoski, who directed this part without her sister Lilly, delivers a strange conglomerate: on the one hand there is a lot of fan service, on the other hand she doesn't seem to care at all about what made especially the first film a timelessly brilliant classic. As a fan, there is always a sense of the spirit of the original trilogy, which is then repeatedly ruined by inappropriate gags or surprisingly bad acting. The short appearance of the Merovingian, for example, is simply a disaster. And even Keanu Reeves' acting shows little of what once made Neo such a special hero.

I'll be honest: I wanted to like "Matrix Resurrections" so much. And I still want to. I'm almost certain I'll like the film better on a second viewing, because there's no expectation left to be disappointed. On the other hand, there are simply elements of the production that I will never like. Let's take the machines. They were a real threat in the original trilogy and looked accordingly. Now, however, there are also machines that side with the humans, and here the design shows unflattering references to the "Transformers" movies that I just found inappropriate. Cute or even funny machines simply have no place in the world of "Matrix".

That the film is no longer about saving humanity, but at its core "only" a love story is told, has not actually bothered me. But the explanation why Thomas Anderson aka Neo and Trinity are back in the Matrix is so absurd that the romantic spark just doesn't want to jump over. Yes, the film has entertaining moments and good approaches - but just because the reason for a return to this world is not really plausibly explained (only on the meta-level with a "Warner Bros wanted to make a fourth part at all costs"), this sequel is unfortunately completely unnecessary at its core.

You see, "Matrix Resurrections" is not a simple movie. There are so many aspects that don't work that it would be easy to just label it as bad. On the other hand, there are exciting ideas, successful approaches and entertaining moments. I can understand if you are annoyed by this sequel, but at the same time I can also understand if you celebrate it as good entertainment cinema. For me, the rating is somewhere in between, which frustrates me even more in the end, since I was really looking forward to the return to the world of the Matrix and had expected something really great. Therefore, I give it a "Seeable" - but with clear limitations. And that I find really a pity...