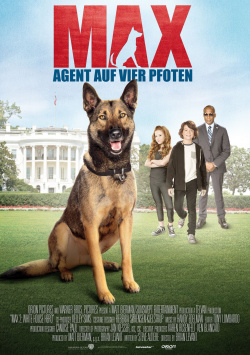 Former military dog Max has a new job: he is to support the Secret Service in the White House. Here, the German shepherd quickly befriends the president's son TJ (Zane Austin), who is still very uncomfortable in his new home. But there is little time for relaxed walks and romps in the long hallways of the White House. Because when Russian President Bragov (Andrew Kavadas) arrives for a state visit, TJ senses a grand conspiracy against his father (Lochlyn Munro). Together with Max and Alex (Francesca Capaldi), the Russian president's daughter, the boy sets out to uncover the plot. But this is more difficult and dangerous than expected.

Max - Agent on Four Paws is the sequel to the 2015 feature film Max: Best Friend. Hero. Savior, which was a bit of a surprise hit, at least in the US. Director Brian Levant was hired for the second installment, which was released directly to home theaters in the U.S. after a very limited theatrical release. He had great success in the 1990s with shallow family entertainment. Works like A Dog Named Beethoven, A Promise is a Promise or Flintstones: The Flintstones Family come from Levant's account. And looking at his latest work, you somehow get the feeling that this film is from the same era. The music penned by Randy Edelman - who also had his greatest successes in the '90s - the no-name cast and the very kid-friendly action make the film feel like one of those direct-to-video sequels you found in droves in video stores back in the day.

Everything about Max - Agent on Four Paws feels extremely antiquated, from the humor to the family is the most important message to the cliché villains. It almost feels like Levant took the script for a previously unfilmed Beethoven sequel and simply changed the name to Max. There's no question that twenty-something years ago, this flick would have drawn kids to the theaters in droves. Whether it can succeed in the age of Minions, Ice Queens or Bibi & Tina is more than questionable.

Since the film also has only the name of the dog in common with the first part and the events from the predecessor are also not really mentioned, this flick can not even be recommended to the few viewers in Germany who Max: Best Friend. Hero. Rescuer and hoped for a sequel. For dog fans between 6 and 11 years the film is the right fodder for an entertaining home cinema afternoon. But you really don't have to go to the cinema for it. Therefore there is here only one: Conditionally worth seeing