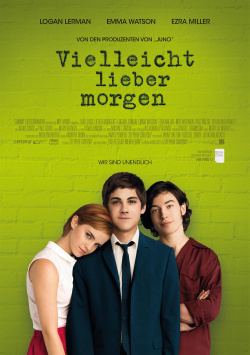 Charlie (Logan Lerman) faces problems with his new life at high school that many of his peers have to go through. He is an outsider who only receives anything resembling friendship from his English teacher (Paul Rudd). His sister Candace (Nina Dobrev) is embarrassed to be seen with her little brother. And shy Charlie has to put up with constant bullying from older students. But for Charlie these are only superficial problems, he has to deal with a much more serious trauma. For not long ago Charlie's best friend died, a loss that his soul, untrained in matters of grief, has not yet been able to process. His life, riddled with dark thoughts and depression, seems to take a turn for the better when Charlie meets maladjusted stiff siblings Sam (Emma Watson) and Patrick (Ezra Miller). In their haze, the withdrawn boy manages to come out of his shell, make friends, party and have his first experience with love. But then he begins to develop stronger and stronger feelings for Sam - and his carefully built happiness may be destroyed again as a result.

With Maybe Better Tomorrow, Stephen Chbosky has directed a wonderful film adaptation of his own cult novel This Then Is My Life. Since its publication in 1999, the book has found many avid readers, becoming required reading in some schools while being banned in others. It was the perfect decision for Chbosky to not only write the screenplay himself for a film adaptation, but also direct it. This ensured that his vision and the heart of the novel would translate to the screen as well. And Chbosky really did manage to do just that almost perfectly. With a great ensemble of actors, a carefully chosen musical background and, of course, not least, the wonderful screenplay, Maybe Better Tomorrow has become one of the most beautiful, honest and moving films about growing up and about friendship to be seen in cinema in recent times.

What contributes essentially to the success of the story is its somehow timeless production. While it's certainly possible to determine from the music, the fashion and a few other clues that the events don't take place in the present, but rather in the late 70s, early 80s. Still, the whole thing doesn't feel like a movie focused on this particular era, as the décor, music and pop culture quotes play an important role, but are still integrated into the action rather discreetly. Thus, the actual story and especially Charlie's problems are fully in the foreground. And with those not only viewers who were once teenagers, but even the young people of today can still fully identify.

The feeling of somehow not belonging and being completely helpless in the face of life, already conveys the book in a very understandable way. Therefore, many readers have recognized themselves in Charlie, have drawn strength from his words and found support. Due to numerous letters and e-mails from enthusiastic fans, Chbosky was also aware when adapting his book for the film version, which is why it was important for him to find an actor with all the attributes that make up his literary Charlie. In Logan Lerman, he has indeed found just that actor. The fact that this goes down a bit is not because of Lerman's really spot-on performance, but because all of the supporting cast is absolutely strong as well. Ezra Miller, who recently played arguably one of the most hateful characters of the cinematic year in We Need to Talk About Kevin, makes a particular impression. Here he also delivers a very complex performance, but in the process turns his flawed, vulnerable character with the strong, confident facade into a real sympathetic figure. It's a pretty great performance that makes you eager to see what else the young actor has up his sleeve.

High praise, however, is also due to Emma Watson, who manages the feat of making you stop seeing the Hermione Granger she's played in the Harry Potter films for the past decade after just one minute, and instead see Sam in her. And that, because of the multi-layered nature of this character, is tremendously important, which is why you credit Chbosky for having the courage to cast an actress as committed to a role as Emma Watson for this role and just trust in her talent.

Maybe Rather Tomorrow is a great teen drama, a touching as well as entertaining story about the sometimes painful journey to adulthood. Humor, drama, closeness to life and very big, very authentic emotions make this best-selling film adaptation a real insider tip, which fans of sophisticated American arthouse entertainment should not miss. Absolutely worth seeing