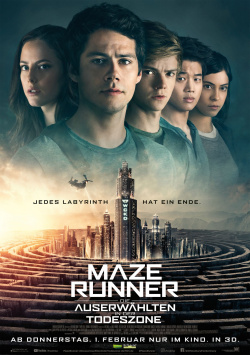 Maze Runner - The Chosen in the Dead Zone

Thomas (Dylan O`Brien) and his friends have survived first the Maze and then the Burning Desert, escaping the clutches of WCKD. But Thomas is not ready to flee with a group of survivors to a supposedly safe place. For Minho (Ki Hong Lee) is still in the grip of WCKD - along with many other children and teens who are being abused by the organization for their research into a cure for the plague that has wiped out or turned much of humanity into zombies of sorts. To free Minho and put an end to WCKD, there is only one way: they have to infiltrate the last city that is hermetically sealed off from the outside world - directly into the headquarters of WCKD. But to do so, they also need the help of Teresa (Kaya Scodelario), who has joined the enemy.

A year late, Maze Runner - The Chosen in the Dead Zone, the finale of the trilogy based on the bestselling books by James Dashner, hits theaters. Due to a serious accident on set, leading actor Dylan O`Brien was unable to continue shooting for several months. A forced break of several months has of course the consequence that it must first be waited until all participants in front of and behind the camera have completed other obligations before it can continue. But now that filming has been successfully completed, fans can finally find out how the story about the Chosen will be resolved in the dystopian future.

The positive first: Was already part 2 not a clear repetition, but a quite successful further development of the story, so also the finale goes again in a different direction. Although there are dramaturgically quite a few repetitions, but overall the film is much more action-packed and elaborately staged, than its predecessors. The fact that despite the difficulties and delays allegedly only 60 million dollars were available as a budget, especially the explosive last act is not to be seen. The whole thing is clearly more exciting and fast-paced than part 2, but has to struggle with similar problems, especially on a dramaturgical level.

Not only is the dialogue extremely cliched, there are also some overly contrived moments that are completely nonsensical almost in an annoying way. Not to spoil too much, maybe just one small example: When during a wild chase, the course of which even the most ingenious strategists couldn't predict with complete accuracy, the enemy stops in vast terrain at the exact little spot where an ambush is waiting for him, then as a viewer you have to squint more than two eyes to find that even remotely believable. Unfortunately, there are several such moments throughout the film.

The resolution of the whole thing is okay, but on reflection also leaves a slightly pale aftertaste. Nevertheless, even if there is much to criticize - which was already the case with the first two parts - Maze Runner - The Chosen in the Death Zone is still for fans overall a successful, quite spectacular and entertaining conclusion of the trilogy. For this there is then also a satisfied: Worth seeing!

Cinema trailer for the movie "Maze Runner - The Chosen in the Dead Zone (USA 2017)"
Loading the player ...