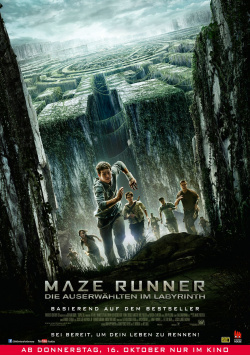 Maze Runner - The Chosen In The Labyrinth

Without any memory, a boy (Dylan O`Brien) wakes up in a clearing surrounded by a group of other boys. Soon he can remember that his name is Thomas, but everything else continues to be in the dark. From Alby (Aml Ameen), the leader of the boys, and his number two Newt (Thomas Brodie-Sangster) Thomas learns that he is in the middle of a huge labyrinth from which there seems to be no escape. Day after day, so-called Runners explore the labyrinth's corridors. But they have not found a way to freedom in several years. That's why Alby and the others have built a small society in which each individual has an important task to fulfill and must abide by some rules. The most important one is: never go into the labyrinth on your own. Thomas finds it very hard to just accept all this. When suddenly a girl (Kaya Scodelario) appears in the clearing who seems to know Thomas, events take a dramatic turn.

Maze Runner - The Chosen in the Labyrinth is based on the successful trilogy of novels penned by James Dashner. Of course, the comparison to other young-adult series such as The Tributes of Panem or Divergent - The Destiny is obvious. And Dashner's books have also been compared to the classic Lord of the Flies and the cult TV series Lost. But even if all these associations are justified, you have to admit that the novel and its film adaptation by newcomer director Wes Ball go their own way in a very pleasant way. For example, the almost obligatory love story for this genre is dispensed with. Also, there are no youthful heroes with very special powers. The protagonists are just normal guys who have to stand their ground in an extreme situation and build a new kind of functioning society on their own. And that makes the whole thing very exciting and interesting, despite many familiar building blocks.

The distribution of roles is kept a bit very clichéd, though. Already when the camera drives the first time through the ranks of the chosen ones in the labyrinth, you know as a viewer who is the leader, who will be the antagonist for our hero, who is the lovable jerk who will faithfully stand by Thomas and who will simply fall victim to the dark mysteries of the labyrinth as an extra. And dramaturgically, subtlety isn't really the film's greatest strength either. Thus, there are dialogue sequences where you definitely have the feeling to be able to speak along. Also the almost unintentionally funny "Tell my parents that I love them - You'll tell them yourself" can't be missed.

Despite many clichés and a certain predictability Maze Runner - The Chosen in the Labyrinth is overall very exciting and atmospherically staged. The scenes inside the labyrinth even manage to give a decent goosebumps, especially to slightly younger viewers. What awaits the boys there, of course, should not be revealed at this point. But this much is said: even if it is not always taken with the logic so exactly, the special effects, the camera work and also the very good sound design provide a high level of suspense, which can be held until the open end at a decent level.

In recent years, there have been repeated attempts to follow the success of Harry Potter, Twilight or Panem with film adaptations of book series from the Young Adult area. Many of these attempts failed, which is always particularly annoying when the audience is not presented with a complete story. This would also be a major shortcoming with Maze Runner - The Chosen in the Labyrinth, however, it is already certain that there will at least be a second part, which will be released in cinemas as early as 2015. Wes Ball's feature debut is by no means perfect, but for what the film wants to be, the Hollywood newcomer has really done a great job. Convincing young actors, an atmospherically dense production and decent effects clearly prevail here against the somewhat too clichéd script and ensure that in the end a thoroughly positive overall impression remains. Therefore, for lovers of gloomy dystopias, which are primarily aimed at a youthful target audience, absolutely worth seeing!

Cinema trailer for the movie "Maze Runner - The Chosen In The Labyrinth (USA 2014)"
Loading the player ...