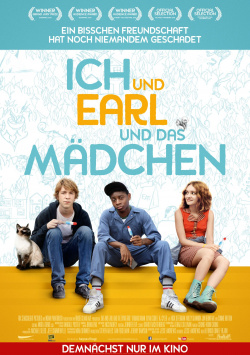 Me and Earl and the Girl

So far, Greg (Thomas Mann) has successfully managed to move through his school day completely unobtrusively. He doesn't belong to a clique and thus doesn't become the target of teasing, bullying and other disasters. On the other hand, Greg is happy to accept that this means he has no real friends. After all, he's going to college soon anyway. Even Earl (RJ Cyler), with whom he has made dozens of short film parodies of classic movies, he sees as a colleague rather than a friend. But then Greg is forced by his mother (Connie Britton) to visit his classmate Rachel (Olivia Cooke), who has been diagnosed with cancer. And though he initially resists, a friendship actually develops between him and the dying girl - a friendship that will change everything.

With his second directorial effort, Me and Earl and the Girl, Alfonso Gomez-Rejon delivers a marked contrast to his successful horror remake Wait Until Dark. The film adaptation of Jesse Andrews' acclaimed young adult book Me and Earl and the Dying Girl is an original coming-of-age story that impresses with wonderful characters, biting dialogue, and a skillful departure from common clichés. Andrews was allowed to write the screenplay himself, with assistance from accomplished screenwriter Dan Fogelman. The result captures the tone of the novel very well, while also making very good use of the dramaturgical as well as visual possibilities of filmmaking.

Truly, the tragicomedy is not just aimed at teenagers who are tired of being fed flat comedies with adolescent sex jokes. Older viewers are also guaranteed to be swept away by the story and its very beautiful realization. The endearing homages to various film classics alone ensure that you leave the cinema with a smile on your face in the end, despite a few sad moments. The film's humor plays out on several levels, though there are few moments that inspire truly hearty laughter. Rather, a charmingly amusing mood is built up, which always manages to hold its own against quieter and more serious moments. Thus, in the end, it is achieved that the story never loses itself in complete sentimentality and, despite the slightly overdrawn characters and the somewhat overstylized staging, comes across as genuine and extremely touching.

The soundtrack, which consists largely of pieces by Brian Eno, also clearly sets the film apart from the mass of similar stories. The music perfectly underscores the top-notch acting of the three leads, with Olivia Cooke (Bates Motel) in particular making a lasting impression. Certainly, for audiences used to only mainstream comedies, Me and Earl and the Girl may be a wee bit too quirky and not silly enough. Moreover, many youngsters are unlikely to understand the references to older films unless they are passionate movie lovers themselves. But if you can get into the very unique style of the production, if you loved the book or just like beautiful stories about friendship, love and growing up, you should definitely not miss this little gem. Absolutely worth seeing!