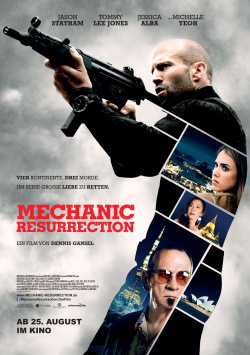 Once upon a time, Arthur Bishop (Jason Statham) was the best hitman money could buy. But his days as an elite killer are over. Bishop faked his death and went into hiding. But his self-imposed retirement is abruptly interrupted when stone-cold businessman Crain (Sam Hazeldine) tracks Bishop down and wants him to once again use his extraordinary skills to take out some pesky competitors of Crain's. Bishop wants nothing to do with any of this and makes that clear to Crain in his own special way. But the ruthless gangster is unwilling to take no for an answer. He finds the professional killer's Achilles heel in the attractive Gina (Jessica Alba). To save her life, Bishop is willing to show once again what made him the best at his craft. At least, that's what he wants Crain to believe. Because really, Bishop has only one goal from here on out: to take out the man who kidnapped his girlfriend.

With Mechanic: Resurrection, director Dennis Gansel (The Wave, We Are the Night) delivers his Hollywood debut, which he had the pleasure of directing in picturesque locations in Thailand and Brazil. The sequel to 2011's action smash The Mechanic, a remake of the Charles Bronson classic Cold Breeze, is an action vehicle clearly tailored for Jason Statham. And as such, the film has decent entertainment value once the story gets going and Bishop goes about his deadly missions in a maximum-security prison or a hermetically sealed luxury penthouse.

But unfortunately, the film isn't all Bishop's bloody McGyver interludes and neat action sequences, it's also something of a plot and terrible dialogue that even a seasoned mime like Tommy Lee Jones can't save. And at such moments, the flick is not only unintentionally hilarious, but also surprisingly boring. On top of that, there are some very obvious bluescreen effects that give the production a slightly trashy feel. Still, the movie could have worked well if it had displayed a bit more self-irony. But apart from a few moments, Mechanic: Resurrection seems to take itself a bit too seriously, which doesn't help the overall impression.

Overall, the movie has quite a few good moments to offer, which keep it from being really bad. But the negative aspects are too obvious to call this sequel a success. If you love Jason Statham and enjoy watching him dance with Jessica Alba or spend minutes preparing his next assignment, you'll get your money's worth here. But if you need more than a few decent fight sequences for a good action movie, you'll roll your eyes here quite a few times in view of the thin dialogues and the many clichés. Therefore, there is for this film, reminiscent of the works that came in the 80s en masse directly into the video stores, only a very limited: worth seeing!