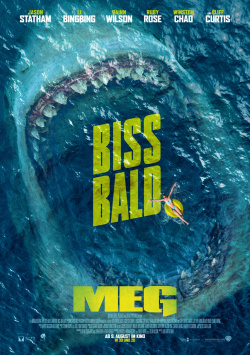 Jonas Taylor (Jason Statham), a specialist in deep sea rescue operations, is a professional at his craft. Yet the experienced diver is forced to abort a dangerous mission, causing him to lose some of his crew. Worse, no one wants to believe him about the reason for the disaster. But Taylor insists that they were attacked by a giant creature that still lurks deep in the sea. Five years after the tragedy, Taylor's marriage and reputation are destroyed. But when a deep-sea submersible belonging to a new international marine monitoring program is attacked by a giant creature and lies on the ocean floor unable to maneuver, Taylor, now reclusive, is hired to help with the recovery. When he learns that his ex-wife is on board the submarine, he is persuaded to take part in the dangerous mission - but he has no idea what danger really lurks in the depths of the sea.

MEG is just as stupid as the synopsis makes it sound. That's not really a tragedy in a film like this, as long as the fun factor is right. Because wonderfully senseless popcorn cinema can be really enjoyable - especially when it is also served with a little self-irony. But unfortunately, there's as little of that in this monster shark parade as there is of the titular behemoth himself. Granted, Jason Statham is really cool in some scenes and some moments also have a pleasantly high show value. But overall, there's too much talking and not enough shark action on display here.

Once the megalodon appears, you usually only see its outline, its fin, or part of its huge body. In full size, he is seen far too rarely for a film nearly two hours long. Instead, miserably long pseudo-scientific conversations may be held or family problems rolled around. Especially when Ruby Rose, with her rather one-sided acting talent, is supposed to give the great scientist, the whole thing becomes an unintentionally comical farce, robbed of any form of real humor by completely failed emotional moments.

Does this mean that MEG is a really bad movie? No. Because there are quite a few moments where the whole thing is good fun, despite the really thin script and less than stellar cast. But director Jon Turteltaub would have been well advised to spice the flick up with a little more Meg, a little more humor and a little more coolness, and instead do without some of the unspeakable dialogue scenes. Not a complete flop, but also nowhere near the great fun that the admittedly good advertising campaign suggested. For this there is then also only one. Still worth seeing with cutbacks!