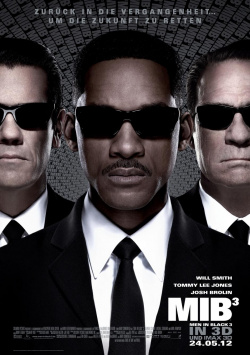 After a ten year absence from the big screen, the Men in Black are back in action! Director Barry Sonnenfeld has finally managed to get Will Smith and Tommy Lee Jones in front of the camera for a third installment in the popular series after initial scheduling difficulties. After the second film was financially very successful with a worldwide box office takings of over 400 million dollars, but fell far behind the 1997 first film in terms of quality, the anticipation for a third part was limited for many. But those who liked the first Men in Black can rejoice: the ten-year break has done the franchise good, because part 3 is definitely better, funnier and more exciting, than the weak Men in Black 2 - but also quite a bit darker.

Agent J (Will Smith) has now been with the Men in Black for 15 years. In that time, he hasn't really gotten any closer to his surly and taciturn partner K (Tommy Lee Jones). When the dangerous alien criminal Boris (Jemaine Clement), whom K had arrested decades ago, escapes from the lunar maximum security prison, K wants to finish what he started as a young man alone. But something seems to go terribly wrong in the process, because when J arrives at work the next morning, he learns there from his new boss O (Emma Thompson) that K died in the line of duty in 1969. Since this has devastating consequences for the present, there is only one way to save K and all of humanity: J must travel back in time and prevent K's murder. But upon arriving in 1969, the Man in Black finds that his adversary is more cunning and dangerous than he thought. And the fact that K was a damn stubborn bastard even as a young man (Josh Brolin) doesn't make the rescue mission any easier...

Men in Black 3 is superior to its predecessor in almost every way. Sure, the aliens are no less quirky and the humour is occasionally arguably bizarre, but it still feels far less forced and overstuffed than Agent J and K's second outing did. True, the film takes a little while to get going after its good opening sequence on the moon prison. But soon the actors and also director Barry Sonnenfeld are back in their element and present an entertaining time travel, which is not only very funny, but also really exciting in places.

This is also due to the fact that the Men in Black have to deal with a really good counterplay again this time. Jemaine Clement, part of the New Zealand comedy-folk duo Flight of the Conchords, is unrecognizable as alien villain Boris, but delivers a great performance behind his mask. The alien with a real knack for deadly projectiles doesn`t come close to Vincent D`Onofrio aka Edgar from part 1. Still, the mix of menacing and comedic character is one of the really positive aspects of an overall very successful sequel that thankfully breaks some new ground while also skillfully bridging the gap to the first films.

This is done, for instance, by picking up some running gags from the first two films, such as the obligatory cameo appearance by a Barry Sonnenfeld sitting on a couch again, or the outing of some celebrities as aliens going on in the background, and by little nods to characters who are no longer with us in the third film (K's speech at the funeral service for the just-deceased Zed is just wonderful). And also the interaction between the again very lively and cool acting Will Smith and the permanently grumpy Tommy Lee Jones makes clear once again why the first two parts were so successful.

Home star of the third film, however, is neither Will Smith, nor Tommy Lee Jones, but his younger alter ego Josh Brolin. Brolin does a first-rate job of mixing Tommy Lee Jones' facial expressions and mannerisms with a bit of youthful looseness. In the original English version, it's also clear how well he's also adopted his older colleague's duct. In this way, he is the perfect younger version of Agent K, who, especially when flirting cautiously with an extremely attractive O (Alice Eve), shows sides of himself that are completely alien to J. A disbelieving what happened to you escapes his lips more than once.

Besides the good mix of humor and suspense, the special effects are also spot on, producing some very watchable moments. Whether you absolutely have to experience these in 3D is up for debate. The 3D effect comes into its own especially in the first third of the film. But at the latest when J travels back to the 60s, the three-dimensional visuals finally become a minor matter, so that in the end watching this fun adventure in any dimension is a great pleasure. Therefore, if you liked at least the first Men in Black movie, you shouldn't miss the return of Agents J and K. Although there are the one or other small hanger and weak gag, but overall outweighs a very positive and entertaining overall impression. So no reason to get blitztdigst after this movie to forget part 3 immediately! Absolutely worth seeing!