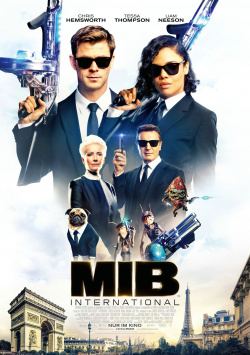 Since watching the mysterious alien hunters known as Men in Black as a child, Molly (Tessa Thompson) has been obsessed with tracking them down and working for them. And her persistence pays off: She finds MIB headquarters in New York and even manages to convince their head Agent O (Emma Thomspon) that she would be a perfect addition to the team. And so it's not long before she gets her first assignment: She's to accompany the somewhat self-absorbed Agent H (Chris Hemsworth) to a meeting with a royal alien in London. What she doesn't suspect: Behind what the alien is carrying are not only other aliens, but obviously also a mole from their own ranks. And so Molly aka Agent M and Agent H must fight not only deadly threats from outer space, but also their own people, to save the world.

Men in Black without Will Smith and Tommy Lee Jones - can it work? The answer to that is ambiguous: yes, Men in Black: International has moments where you don't miss the stars from the first three films and where it becomes clear that the series could do with some fresh blood. But at the same time, no, because already parts 2 and 3 weren't really good movies anymore to be honest and only lived on the good chemistry between the so different main actors. But let's start with the positive: Director F. Gary Gray does a very good job of transporting the viewer into a familiar world but developing something new and original within it. There may be much that is reminiscent of the predecessors, but at the same time there is also a noticeable further development, from which the franchise really benefits.

Also the fact that here was not cramped trying to offer a similar constellation in the protagonists, as with Will Smith and Tommy Lee Jones, has a positive effect. Tessa Thompson and Chris Hemsworth, who already played off each other so well in Thor: Judgment Day, once again harmonize convincingly with each other. It's fun to watch the two of them have to team up to save the world. However, some snappier dialogue would have done their cabbles some good.

Anyway, the entire script lacks a bit of pepper. You always get the feeling that the staging is (almost) all the time with the handbrake on. Many scenes are amusing, but the really big laughs are missing. And the action is respectable, but far from being truly spectacular. In the end, there is no real disappointment, but the feeling that there could have been much more. And that's a real shame, given the successful approaches and really nice ideas that this sequel-reboot mix is peppered with.

Men in Black: International convincingly develops the idea from which three films have already been made. But that alone isn't enough. A better script and some more fast-paced, shrewd staging would have done the overall average work some good. And so the bottom line is: nice popcorn entertainment with a few really successful scenes, but overall sells itself short. Worth seeing!

Cinema trailer for the movie "Men in Black: International (USA 2019)"
Loading the player ...