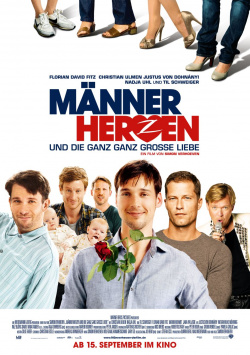 Günther (Christian Ulmen), Jerome (Til Schweiger), Philip (Maxim Mehmet), Niklas (Florian David Fitz), Rland (Wotan Wilke Möhring) and pop star Bruce Berger (Justus von Dohnányi) are back to make their men's hearts beat fiercely once again. After the great success of Simon Verhoeven's ensemble comedy, which attracted over 2 million viewers to the cinemas, the entire team has been brought together again to give fans a sequel on a par.

Männerherzen und die ganz große Liebe starts exactly where Part 1 left off. If it still seemed that (almost) all protagonists were given a happy ending, the viewer is now disabused. Jerome's return to his ex really didn't go the way it seemed. Because she is now a happily involved mother, which quickly puts the womanizer back on the street. But the music producer doesn't want to go back to Berlin, and so he settles back in with his mum and dad, hoping to find a new meaning to his life in these familiar surroundings. Philip and Nina (Jana Pallaske) are preparing for the birth of their child. Everything seems to be going well, especially since Philip's organic café is humming. But when the couple learns they're expecting twins, it's just the beginning of a whole new set of problems.

Günther can't really be happy either. True, he has conquered the heart of Susanne (Nadja Uhl) and he is also safe from her choleric ex-husband Roland, who is still in jail. But the idea of a first night together brings back all his insecurities in the shy trade inspector. Niklas also has to struggle with insecurity after his girlfriend leaves him for good and he desperately tries to meet up again with his affair Maria (Inez Björg David), who has meanwhile risen to become a sought-after serial star. And finally, pop star Bruce Berger falls prey to youth mania and believes he can propel his career to new heights with a blatant image change. Even the loss of his record contract cannot curb his enthusiasm, which is stimulated by alcohol and other drugs. But then his career plan suffers a major setback.

Simon Verhoeven has clearly tried to give all fans of the first film exactly what they want to see with Men's Hearts and the Very Big Love. More of the beloved characters, more of the successful mix of humour, drama and romance and most of all more Bruce Berger. Because he was clearly the secret star of Part 1, despite the strong cast holding significantly bigger roles, and so he's not just given more space in the story here. Rather, he is even the central focal point, tying all the storylines together.

But the sequel is not simply more of the already familiar, it is also a consistent development of the characters and a continuation of their stories. Yet, as with its predecessor, the individual storylines work to varying degrees. While the stories about Niklas and Maria, Günther and Susanne, as well as Jerome's clearly follow the pattern of typical romantic comedies, whereby the humour is dosed differently in each case, the plot about the expectant parents Philip and Nina is more clearly anchored in reality. The rather dramatic fate of Roland, on the other hand, provides a coherent counterpoint to the film's otherwise humorous events.

And then, of course, there's Bruce Berger. Verhoeven does try to make the character seem like a sort of tragic buffoon, in danger of being consumed by his hunger for success and his delusions of youth. And yet, the fallen pop star is arguably the film's most overdrawn character. It is, as in the first part, extremely funny in many places. But in some other moment, the character so popular with fans threatens to become a caricature of himself and the gags then also close a little over the target.

This is sometimes the case with the other characters, especially with the once again wonderfully embodied by Christian Ulmen Günther, but with Bruce, the exaggeration falls more heavily because this character takes such a central role. But even if it becomes clear that more is not always better, it is fair to say that Männerherzen und die ganz große Liebe has become a really successful sequel, which serves all fans of the first film in the best way and despite some hangs makes you want more. A good ensemble, an entertaining script and a director who's passion for this project is obvious, make part 2 definitely: worth seeing!