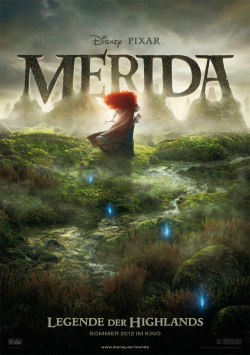 Merida - Legend of the Highlands

The name Pixar undoubtedly stands for quality when it comes to animated films. With successes such as Toy Story, Finding Nemo, Ratatouille, Wall-E or Above, the creators of the animated film forge have not only succeeded time and again in charming millions of young and old moviegoers. Pixar works, regardless of whether they are short or feature-length films, also regularly win prizes at countless awards ceremonies. Now the studio is delivering its latest prank: the fairy tale Merida - Legend of the Highlands. And while it's fair to say that the influence of Pixar partner Disney is most noticeable here so far, the studio once again more than lives up to its reputation.

The film tells the story of Merida (voiced by Nora Tschirner), daughter of the Scottish king, who loves her freedom and is only too happy to always assert her stubbornness. But Merida's mother, Queen Elinor, has very different plans for her daughter's future: she is to marry one of the clan sons from the kingdom as soon as possible and thus secure the succession to the throne. And so the three clan lords and their sons are invited to the king's court to compete in an archery tournament for Merida's hand in marriage. But when Merida herself enters the competition with a ruse and wins over her potential husbands, this causes mighty trouble not only among the lords. Elinor is also fuming. After a heated argument, Merida flees the castle to let her anger cool down a bit in the forest. But when she sees some magical will-o'-the-wisps there that lead her to an enchanted place, the story takes an unexpected and dangerous turn...

The team led by directors Mark Andrews and Brenda Chapman have done another first-rate job visually with Merida - Legend of the Highlands. Whether the wonderful landscape of the Scottish Highlands, the blue will-o'-the-wisps or small details in the design of the characters, all this testifies to quite great animation art. With a lot of attention to detail and well-applied 3D effects, an enchanting world has been created in which viewers of all ages can lose themselves only too gladly. Unfortunately, the story doesn't quite manage to live up to the high visual level. Although the story at the end is a bit more profound than the trailer initially suggests, compared to other Pixar films Merida - Legend of the Highlands unfortunately only offers good mediocrity in this aspect. However, this is still better than many other rather lovelessly cobbled together animated films.

With elements of fairy tale, comedy, adventure and fantasy, a beautiful mother-daughter story is told that touches without getting too cheesy and offers many extremely good laughs without drifting too much into infantile silliness. The most surprising aspect of the film, however, might be that despite the clear Disney influence, the obligatory knight in shining armor is completely dispensed with. It's not about a rebellious princess finding her true love. Rather, it's about an overprotective mother and her daughter struggling for self-determination. And that's a rather unusual theme for an animated film after all. The only real problem that this brings with it is that boys will probably relate to the story much less than girls. Admittedly, there is enough adventure and comedy that boys are likely to be amused by as well. But all in all Merida - Legend of the Highlands is probably more a movie for girls and their mothers.

For me as a big Pixar fan Merida - Legend of the Highlands is clearly ahead of Cars or The Big Crawl, but also clearly behind Wall-E or Above. But even if the creators didn't hit the big time here, it's still way ahead in terms of visuals, character drawing and story structure. It's an enchanting fairy tale that, accompanied by Patrick Doyle's atmospheric music, invites you to laugh and dream. And that's exactly why Merida's adventures are for young and older animation film fans: absolutely recommendable!

Another tip: Be sure to get to the cinema in time, because there is of course once again a quite wonderful Pixar short film. The Oscar-nominated La Luna is really quite enchanting and absolutely worth seeing!

Cinema trailer for the movie "Merida - Legend of the Highlands (USA 2012)"
Loading the player ...