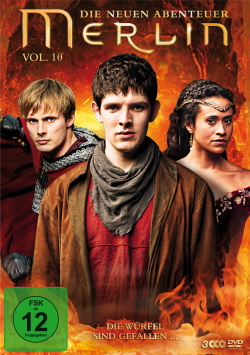 Content: The adventures of wizard Merlin (Colin Morgan), King Arthur (Bradley James) and their common fight against Morgana (Katie McGrath) are coming to an end. For Merlin, this is primarily about protecting his friend Arthur, knowing the prophecy that foretells the king's death. And for the good of Camelot, that must not happen under any circumstances. But Morgana has a few trump cards up her sleeve. For example, she casts a spell on Gwen (Angel Coulby), so that the king's wife suddenly turns against her lover and also reveals important secrets from Camelot. Moreover, traitors have also crept in there, posing another great danger to Arthur's life and the safety of the kingdom. In these perilous times, Merlin must decide whether to finally face his destiny and allow his still-hidden powers to take hold. For Camelot now needs the greatest wizard of all time...

As the series draws to a close, the creators of Merlin - The New Adventures have visibly tried to give fans an exciting, emotional and coherent conclusion. This works very well in some moments, while in other aspects still some weaknesses are revealed. For example, the make-up that transforms Merlin into the old Emrys can only convince to a limited extent and also some of the digital effects make the rather low TV budget clearly visible. However, these are only minor weaknesses that fans of the series have long since come to terms with anyway. What really disappoints in the finale is the last big confrontation between Merlin, Arthur and Morgana, which, after this fight has been prepared over several seasons, turns out a bit unspectacular. And the very last shot is also sure to divide fans' minds.

However, it's not disappointment that prevails in the end, but a satisfaction that relates to the series as a whole. The creators never pretended to want to offer more than entertaining and imaginative entertainment for the whole family. Of course there are repetitive clichés, of course the whole thing doesn't offer any acting feats or breathtaking effects. But what the series wanted to achieve from the beginning, it has mastered with flying colors until the finale. It has offered its fans suspense, very humorous moments, romance, likeable heroes and good antagonists. Merlin has, apart from a few less successful episodes, always been a good adventure series with decent show values and quite developing characters, which is why you also had the feeling that the stories do not tread water, even if some plot lines have dragged on a bit too much or repeated themselves every now and then.

And so we leave Merlin, Arthur and Co. with a laughing and a crying eye. What is clear is that the creators have brought the series to an end at exactly the right time. This makes it hard for the loyal fans to say goodbye. But luckily there are the DVDs, on which the new adventures of Merlin can be experienced again and again in the future. And therefore applies of course also to the last box: absolutely recommendable!

Picture + sound: The technical quality of the DVD conversion is also with the final box of the series on the usual good TV level. The picture is very clean and both the rich coloration and and overall sharpness are at a very good level for a TV series. Only in darker moments are slight weaknesses in detail and minimal noise noticeable. The stereo sound conveys dialogue, music and sound effects powerfully, but overall very centrally mixed out of the speakers. Not an audiovisual revelation, but it's perfectly adequate for a TV series. Good!

Extras: Disc 1 has audio commentaries on each of the episodes Poison for Merlin by director Alice Troughton and Bradley James, as well as With All My Heart with Angel Coulby and Alexander Vlahos. Also on the second DVD is an audio commentary, this time on the episode The Kindness of Strangers, voiced by Bradley James and Rupert Young. Finally, the third disc has cut scenes for four episodes of the box set, some amusing outtakes (approx. 6:26 mins) and a making of the final season (approx. 25 mins), in addition to a commentary on the final episode by Julian Murphy and Katie McGrath. The video extras all have German subtitles, but the audio commentaries can only be enjoyed by fans with a good command of English.

Conclusion: Merlin comes to an end with a real bang. Even if not all plotlines work in the final episodes and not every effect is convincing, the series still comes to an absolutely satisfying conclusion for fans. The tenth DVD box of the series presents the last seven episodes in good picture and sound quality and offers the fans with audio commentaries, outtakes and a making of some nice extras. Therefore: for fans this final box is again absolutely recommendable!