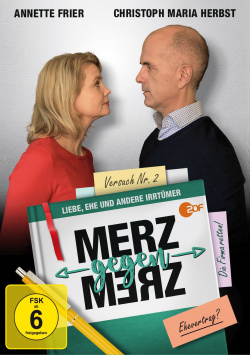 content: Anne (Annette Frier) and Erik Merz (Christoph Maria Herbst) have pulled themselves together again. A marriage contract is supposed to prevent disputes like in the past. But as soon as a breath of harmony between the couple appears, the next marriage crisis is just around the corner: While Erik has to fight against the takeover by the Finns in their joint company, Anne slides into a tangible midlife crisis. When Erik's parents move in with the couple due to an unexpected bankruptcy, Anne has had enough. She moves out and finally wants to enjoy her life. The victim of the resulting conflicts is once again son Leon (Philip Noah Schwarz), who now takes his life into his own hands.

"Merz gegen Merz" succeeds very well in the second season not just to tell the same story again, but to steer the marriage problems between Anne and Erik in a new direction. The series of "Stromberg" mastermind Ralf Husmann lives from wonderfully biting dialogues (the first minutes of the first episode are a perfect example of this) and from the perfect interaction of Christoph Maria Herbst and Annette Frier. The two throw the comedic balls to each other perfectly and you really take away both the noticeable affection and the latent hatred for each other.

Another strength of the series is that it seems very close to life despite a certain exaggeration. And that's also why you can't stop laughing at times. You wish them both to get their marriage back under control - for themselves and also for their son - and to be happy together, but you have to watch them making stupid mistakes again and again, being manipulated by other people and thus slipping deeper and deeper into their private and professional crisis. That's somehow depressing - but also really funny.

Admittedly, some plots seem to be very constructed, but the dialogues and especially the great ensemble easily tear it out again. Towards the end the whole thing threatens to sink a little bit too much into complete chaos, but hopefully a third season (which definitely has to happen after this finale, everything else would just be cruel) can unravel that a little bit again. For sure: If you liked the first season and want to watch the Dreamteam Autumn/Freezer again at the War of the Roses, you shouldn't miss this second season of "Merz gegen Merz". Absolutely worth seeing!

Picture + sound: Since we only had one stream for testing, no evaluation can be made at this point about the final picture and sound quality of the series.

Extras: As a bonus there are ten bonus clips with a running time of almost ten minutes.

Conclusion: "Merz vs. Merz" can still entertain very well in the second season, even if some storylines seem to be a little bit strained. The series lives from the great chemistry between Christoph Maria Herbst and Annette Frier, who once again skillfully pass the ball. Sometimes it's funny, sometimes it's so lifelike that the laughter gets stuck in your throat. A really worth seeing War of the Roses, which has been released on DVD with ten bonus clips as an extra. Absolutely recommendable!