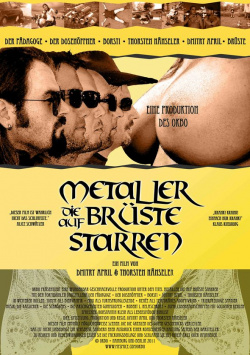 How the inhabitants of the small community Wacken experience the legendary metal festival, you could get a nice picture of it in the entertaining documentary Full Metal Village. The festival visitors, however, only played a rather minor role here and hardly got a word in edgewise. Filmmakers Dmitry April and Thorsten Hänseler have now made up for this in their film Metaller die auf Brüste starren (Metalers staring at breasts), which is affectionately described as a trash documentary, and in doing so deliver an authentic as well as humorous look at the Wacken metal festival and its visitors.

The film takes viewers into the infinite vastness that no human being has ever seen before - at least no civilized and decent human being. With his investigative questions, Thorsten Hänseler not only provides a lot of good humour for the interviewed festival visitors, who are often deprived of clear speech due to no small amount of alcohol and other mind-altering substances, but also for the viewer. When, for example, he discusses the origin of the word "Fisimatenten" with an interlocutor who is no longer in his right mind, or asks a somewhat sleepy young lady about her knowledge of geography, the stunned faces of the interviewees alone ensure many hearty laughs. But the most important question is and remains: what is the worst thing that can happen at a festival like the Wacken Open Air? While some give such poetic answers to this as having seen another man's private parts, the answer can only be: when the beer runs out!

What makes this festival documentary so likeable is that you can tell at every moment that there were real fans at work here. The filmmakers don't keep a real distance from the action around them, but are there with skin and hair, which also makes the concertgoers acting in front of the camera not even think of pretending to be great. Admittedly, the whole thing is not always particularly sophisticated or intellectually stimulating, but in any case the atmosphere at the festival is captured extremely authentically. And when the off-screen narrator comments on the whole thing almost like an episode of In the Kingdom of the Wild Beasts, the self-irony of the makers reaches its peak.

Stylistically, the project of the Offenen Kanal Bad Offenbach from Berlin may not always be first class. The picture is sometimes quite blurry or shaky. But what would really stand out negatively in other films doesn't really bother in this entertaining look at a very special fun culture. So if you've always wanted to see beer cans being bitten open, colorless urine being sung about, men desperately shouting their longing for sexual intercourse into the landscape in onomatopoeic beauty while a lonely maiden on the side of the road plays the Lindenstrassen theme on her violin, then you definitely shouldn't miss Metaller die auf Brüste starren. Great fun - not only for real metallers!

Cinema trailer for the movie "Metallers staring at boobs (Deutschland 2011)"
Loading the player ...