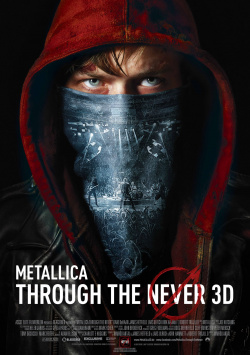 Metallica Through the Never 3D

After more than thirty years in the band's history, more than 110 million albums sold, countless awards and an induction into the Rock & Roll Hall of Fame, it's hard for a band like Metallica to find new challenges to face yet. Sold-out tours, one of the most successful albums of all time, an acclaimed music documentary - James Hetfield, Lars Ulrich, Kirk Hammett and Robert Trujillo have all accomplished that. Now this success story is to be crowned with a unique 3D concert film. The reason why this 3D film is unique is that it is not, as is usually the case, simply a few concerts of a regular tour that were filmed and then edited together to make a film. Rather, a completely unique show was conceived for Metallica Through the Never, for which a spectacular stage was erected that, in combination with lighting, pyrotechnics and, of course, the music, should offer fans a magnificent and unforgettable cinematic experience.

Some of the greatest hits from 30 years of the band's history were captured on a total of five evenings with a total of 24 cameras in front of enthusiastic fans. The elaborate stage design resurrects some downright iconic images for Metallica devotees, which is further enhanced by the 3D visuals. Combining all of this is a small subplot in which young roadie Trip (Dane DeHaan) is tasked with completing an important mission across town by the end of the show. But a traffic accident, brutal riots, and a mysterious masked rider turn this assignment into a truly life-threatening affair for Trip.

Hungarian-American director Nimr&oacute;d Antal (Kontrol, Predators) has made the scenes in this subplot very atmospheric. Still, they detract from the enjoyment of the actual concert, as whenever the audience has been drawn into the show and is really following along with the songs, they are pulled out by the story surrounding Trip. Certainly, it's not a bad idea in itself to add a certain something to a concert film. Nevertheless, the scenes here, despite the technically very good implementation, seem rather like unnecessary filler, which would not have been necessary at all, especially because of the spectacular stage show, to keep the fans - and only for them the film is made - happy.

So Metallica Through the Never has become, despite minor hangs, a really good and very special concert film, which gives the fans from the screen the best possible live feeling and convinces with a great show and a good song selection. And that's why all fans of the band should definitely not miss this 3D movie. Worth seeing

Cinema trailer for the movie "Metallica Through the Never 3D (USA 2013)"
Loading the player ...