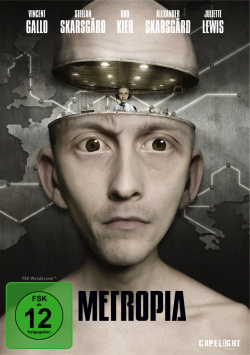 Film: In the year 2024, life as we know it has completely collapsed. Oil reserves are completely depleted, financial markets have collapsed, and the few people who still have jobs have to take a gigantic subway system to get to their jobs. Unassuming Roger, an employee at a call center, stubbornly refuses to use the subway, preferring to ride his bike through the gloomy, rainy streets of Stockholm. But when he finds himself forced to use the subway one day, he begins to hear strange voices in his head. What he initially thinks is a result of his rising panic soon turns out to be part of a larger plan, one in which the seductive Nina, the beautiful girl from a shampoo commercial, also plays an important role. Before Roger knows it, he's in the middle of a dangerous vortex of a large-scale conspiracy that could change the fate of everyone.

Swedish filmmaker Tarik Saleh, once one of Sweden's best-known graffiti artists, delivers a dark vision of the future of a very special kind with Metropia. The visuals alone make the film an intense viewing experience. This is not an animated film of the usual kind. Even if some elements look like almost photorealistic computer effects, other aspects, such as the changed body proportions of the characters, seem unusual and almost alienating. The animation style here and there almost seems like a modern form of silhouette. Often one is reminded of the animations of Monty Python member Terry Gilliam or of a highly technical version of the Krabat cartoon from 1978. By editing photos of real people and places on the computer and presenting them in this very special form, Saleh gives Metropia a look that is truly unique, but which will not be accessible to all viewers. Because what is fascinating for some and makes the very special charm of the film, could be rather exhausting for others.

The world Saleh draws in his future thriller is extremely gloomy and characterized by an enormous monotony. There is as little intimacy here as there is true joy. Into this world, the filmmaker embeds a story that is interesting and has some good moments of suspense. But compared to its special visual realization, the content of Metropia is rather ordinary and almost unspectacular. The fact that Saleh has a rather artistic background and still needs to develop a bit as a storyteller is always noticeable here. Nevertheless, his gritty Big Brother is watching you variation is a very special kind of film experience that still leaves a lasting impression.

Who can get involved with the unusual, sometimes somewhat unwieldy animation style and overlook the dramaturgical weaknesses, should definitely embark on the journey into this bleak, yet fascinating future. Not really mass-market entertainment, but genre fans who also like to face special challenges once in a while can definitely recommend Metropia.

Picture + Sound: The picture, kept in gloomy and dreary colors, captures the atmosphere of the film perfectly. The image sharpness is on a good level despite the mainly dark moments, only here and there small weaknesses in the contrast tuning are noticeable. The sound remains quite restrained, in addition to the dialogue, especially well used ambient sounds determine the action. Towards the end, however, some decent surround effects come into play, which are well accentuated thanks to the good Dolby Digital 5.1 mix.

Extras: In addition to a cut scene and a brief look at the voice recordings, the nearly 12-minute tour of the animation studios is particularly worth watching. An interesting interview with True Blood star Alexander Skarsgård and the visually very unusual short film Tony and Silvio, similar to the main film, round off the bonus material together with the trailer and further programme tips. Good.

Conclusion: Metropia is a dark vision of the future, which remains in the memory especially because of its very unusual animation style. The story is at times a bit confusing and unfortunately not quite as clever as one might initially think. If you like experimental animated cinema and oppressive visions of the future, you can definitely check out this technically well-realized DVD. Worth seeing