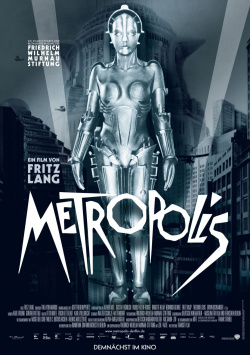 When Metropolis hit theaters in 1927, Fritz Land's monumental production flopped with critics and audiences alike. Even when the scissors were applied to the overlong premiere version in order to shorten the work to a more audience-friendly length, the hoped-for success of the most expensive production of the legendary UFA studios to date failed to materialize. Today, however, Metropolis is one of the most important works in German film history. Many other works have been inspired by Lang's gloomy vision of the future, and time and again his visual language has been cited by great directors from around the world.

All attempts to restore the original version, however, had so far failed. It was only the discovery of a copy in Buenos Aires in 2008 that made what many film lovers had already dared not believe possible. With much love and patience, the Murnau Foundation restored the work and performed the new, almost complete version to enthusiastic audiences in Berlin and Frankfurt in 2010. Although this premiere was broadcast both on television and on the Internet, many viewers were denied the opportunity to experience Metropolis once in the cinema. Until now, because now the restored version is finally coming to cinemas on a regular basis.

The story from the futuristic city of Metropolis, in which Freder from the upper class falls in love with the worker leader Maria from the lower town, while the inventor Rotwang tries to bring about the downfall of the city with the help of a machine man, has lost little of its symbolism, power and fascination even after more than 70 years. From a purely film-historical perspective, this restored version is a gift for any film lover.

It should also be said, however, that younger viewers in particular, who have had little or no previous experience with silent films, will have a rather difficult time with the action, which is divided into three acts. The overly theatrical behaviour of the actors is quite alienating for today's viewing habits and makes it difficult for untrained viewers to get involved with the characters. And that could then lead to a failure to adequately appreciate the greatness of what Lang has created. But watching Metropolis, especially with the cinematic background knowledge of the last few decades, can be extremely exciting. After all, there are always things to discover or sequences to see that clearly inspired other great works in film history.

Therefore, if you care about film history, you can't go past this treasure, the first film ever to be included in UNESCO's World Documentary Heritage. However, those who find it difficult to engage with films outside of the contemporary entertainment industry will surely find little to do with a significant work such as this.