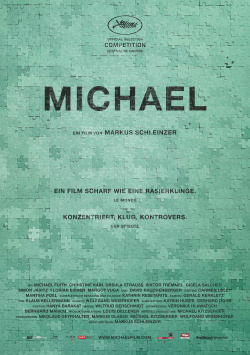 Actually, 10-year-old Wolfgang (David Rauchenberger) could enjoy a nice and relaxed childhood - if he hadn't been kidnapped by 35-year-old pedophile Michael (Michael Fuith) and locked up in his basement. Now he has to endure a cruel everyday life. While the insurance salesman goes about his business, Michael is either trapped in complete darkness or allowed to spend his time reading and watching television. Only when Michael lowers the blinds in the house is the boy allowed out of the basement. The sexual assaults that the boy has to endure seem to have broken his will. But suddenly Wolfgang begins to rebel against his tormentor and the situation threatens to escalate dangerously.

When cases of pedophilia come to light, the perpetrator is usually called a monster. This makes it easier for people to establish a distance from the perpetrator and have some sort of explanation in hand for his incomprehensible actions. With his feature film debut Michael, director Markus Schleinzer wants to break down exactly this distance. By telling the story from the perpetrator's point of view, he wants to show what an important role normality plays in the life of a sick person like Michael. Without moralizing, the story is told very soberly about the last months Wolfgang has to spend with his tormentor. The whole thing is a very quiet, carried staged drama, but exactly because of that it has an extremely disturbing effect on the viewer.

The fact that Michael makes an actually quite normal impression on his environment, that he can party with colleagues, go on holiday or meet up with his sister without anyone suspecting that he has a little boy hidden in his cellar, is incredibly upsetting to watch. But even more harrowing are the moments that show the everyday life between Michael and Wolfgang. The fact that the film avoids overly shocking moments and actually only hints at the horror makes it that much more effective.

Schleinzer, who had previously worked as a casting director and was responsible for the children's casting on Das weisse Band, among other things, has chosen little David Rauchenberger for the role of Wolfgang with a sensitive hand. A difficult role, but one that the boy mastered impressively thanks to the help of his parents and extensive discussions with the director. Michael Fuith also deserves great respect for playing such an unpleasant person with an absolutely frightening credibility. The authentic acting of the two contributes considerably to the fact that Michael has become such a stirring film.

And this despite the fact that the production itself is so worn that at times it is hardly bearable for the viewer. Especially in the last ten minutes the bow is stretched a little bit. Here it seems as if the finale is unnecessarily delayed, whereas Schleinzer still does everything right in the end and leaves the actual resolution of the story more or less open. Because by doing so he avoids having to make use of excessively big emotions, which actually don't exist in the whole movie. The film is cold, sterile in its cruel normality, and highly moving and emotional precisely because of it. Background music, emotional outbursts, all of that would have been guaranteed to diminish the impact.

Michael is an extremely difficult film, hard fare that hits the stomach and the mind. But it's also a very powerful and important work, one that viewers who enjoy challenging themselves should not miss