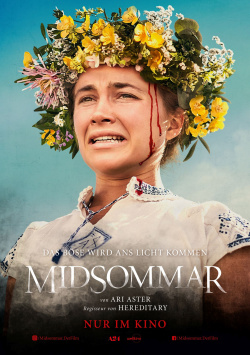 Actually, Christian (Jack Reynor) was about to end his relationship with Dani (Florence Pugh). But then tragedy strikes and it's clear to Christian that he now has to be there for his girlfriend. He even goes so far as to invite her on a trip to Sweden that he really just wanted to enjoy with his buddies Mark (Will Poulter), Josh (William Jackson Harper) and Swedish exchange student Pelle (Vilhelm Blomgren). At first, the young men aren't thrilled about Dani coming along, but they don't want to let it spoil the fun. After all, they've been invited to attend a small village community's special midsummer festival - a real honor, Pelle assures them. And indeed, it appears to be a holiday filled with love and bliss - until the true nature of the festival is revealed to the guests.

With Midsommar, director Ari Aster presents the follow-up, eagerly awaited by many genre fans, to his acclaimed feature debut Hereditary - The Legacy. Once again, the filmmaker takes plenty of time to build up a very special atmosphere before the horror hits with full force. However, this horror trip to Sweden reveals a lot more weaknesses than Aster's debut. Now, I'm not necessarily talking about the fact that lead actress Florence Pugh gets on your nerves very quickly, because Aster simply has her character Dani running around howling hysterically too often. It's more the fact that it often feels like he's almost forced to slam on the brakes with the storytelling pace to avoid being mainstream.

This comes across as being special just for the sake of being special. Yeah, Midsommar has some really strong moments. While none will stick in the mind as long as one very special scene from Hereditary - The Legacy, the film still manages to leave a certain impression through those moments. It also does well that Aster treads somewhat whimsical paths and shows his audience things that you actually haven't seen before. But he also shouldn't lose sight of the fact that a work that scratches at the two and a half hour mark shouldn't just be different, but also has to entertain in a certain way. It may be that there are viewers for whom it's enough that the film isn't mainstream, that it's quirky and non-conformist. But objectively speaking, that's just not enough for a really good film to come out in the end.

So Midsommar leaves a somewhat ambivalent impression. On the one hand, Aster is able to play to his strengths as a filmmaker and manages to prove that Hereditary - The Legacy was no creative fluke. But on the other hand, the horror drama is too unwieldy, too exhausting and far too tough in some moments to be convincing over the overly long running time. And so the bottom line is that it's only worth seeing with small deductions.

Cinema trailer for the movie "Midsommar (USA/Schweden 2019)"
Loading the player ...