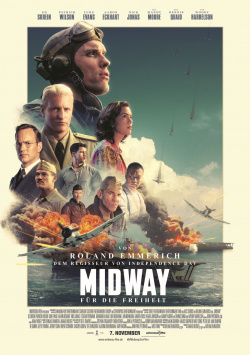 On December 07, 1941, the United States is drawn into World War II when the Japanese attack the Pearl Harbor naval base, killing over 2000 Americans. The resulting Pacific War enters a decisive round in a battle at the remote Midway Islands. From 04 to 07 June 1942, the numerically weakened US Navy and Air Force face a foe seemingly superior in every way. But through clever tactics and incredible determination, the Imperial Japanese Navy is to be defeated. A merciless fight for freedom begins.

With Midway, director Roland Emmerich presents a great war film that - as one is accustomed to from the filmmaker - scores primarily on a visual level. Those who have already discovered parallels to Michael Bay's Pearl Harbor in the trailer, their impression is confirmed here very quickly. As with Bay, the action is bombastically implemented, while it dramaturgically hapens in all corners and ends. The script is full of clichés and dialogues that can hardly be undercut in terms of shallowness. No matter whether they are delivered by rather averagely talented actors like the extremely colorless Ed Skrein or by actors of high caliber like Woody Harrelson or Dennis Quaid, they always sound awful.

You could give Emmerich credit for not only telling the story from the Americans' point of view. But if you now expect real differentiation and believe that the film would not be a hymn to American patriotism, you are sorely mistaken. The whole thing is just extremely one-dimensional in every way. Sure, especially the big air battle in the last act has some very rousing moments. But that's just not enough to make this a good movie that also has a certain purpose. Indeed, there isn't really any discernible one here either.

Emmerich is really good for great entertainment cinema and has delivered plenty of fun blockbusters. But when he tries to do something a little more profound, he usually fails, mostly because of the scripts. That was the case with Stonewall and it's the case again with Midway. A film, which is okay in terms of craftsmanship, but which nobody really needs. Only very conditionally worth seeing!