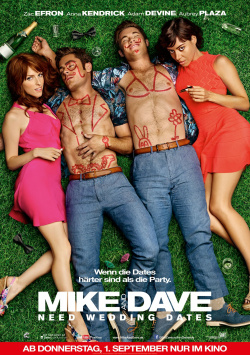 For brothers Mike (Adam Devine) and Dave (Zac Efron), life is one debauched party. Growing up? Bah, why bother? The fact that their friends and family have to suffer from their escapades, especially at parties, doesn't bother the brothers much. The main thing is that they have fun. But when the wedding of their sister Jeanie (Sugar Lyn Beard) is coming up, their parents pull the ripcord: The two singles may only come to the festivities in Hawaii if they come in the company of two respectable ladies. But where are Mike and Dave supposed to find such women? So the kids put an ad in the paper, but hardly any suitable applicants come forward. Only when they meet the friends Tatiana (Aubrey Plaza) and Alice (Anna Kendrick), they seem to have hit the jackpot. After all, the two are not only extremely attractive, but also very sophisticated. At least that's what the brothers think - because the young women have a secret that could turn their wedding into an absolute disaster.

It may sound hard to believe, but the smash comedy Mike and Dave need Wedding Dates is actually based on a true incident. Brothers Mike and Dave Stangle really do exist and their search for respectable dates via classified ad on the portal Craigslist caused all kinds of stir in the US in 2013. This ad was the inspiration for the feature debut of director Jake Szymanski, who unfortunately showed little sensitivity in the implementation of the very raunchy script. Except for the ad, of course, the rest of the film is largely fictional. But it doesn't really matter, because the story here is a minor matter anyway. First and foremost, it only serves to fit as many synonyms for the male sex organ and for sex as possible into the more than shallow dialogues. You almost feel like you're watching a sequel to Dirty Grandpa, in which Zac Efron and Aubrey Plaza also did their best to undercut the lowest gag level.

Admittedly, there are indeed a few good laughs amidst the many extraneous moments - significantly more than in, say, the aforementioned Dirty Grandpa. But unfortunately, the genuinely funny moments end up being significantly outnumbered. It remains a mystery to me why there are so many filmmakers who believe that countless penis jokes make for a really funny movie. There are comedies where that just about works because they have more to offer on the side. But that's unfortunately not the case here. It becomes particularly embarrassing when the protagonists are purged towards the end, revealing their actual dreams and aspirations and thereby trying to offer something like character depth.

And yes, the moral club is blithely wielded towards the end here as well, followed by a cheap joke, of course. If you thought Dirty Grandpa was funny, you'll have a damn good time here too. And that's the audience the movie is made for, after all. That's perfectly okay, but doesn't make Mike and Dave need Wedding Dates a good movie. For those who find this kind of humor appealing, there is a clear worth seeing! For lovers of humor that sometimes takes place above the belt and maybe even in the head, instead: cancel this date immediately!