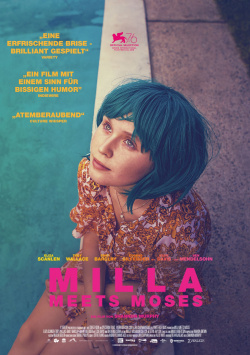 Milla (Eliza Scanlen) does well in school, plays the piano superbly, and grows up very sheltered by her parents - psychiatrist Henry (Ben Mendelsohn) and former concert pianist Anna (Essie Davis). A little too sheltered. Because even though her parents try to offer her normalcy, Milla can tell they're constantly worried. Worry about their daughter's life, which is endangered by a serious illness. Milla wants to break out of this situation, which she succeeds in, at least temporarily, when she meets charming drifter and occasional dealer Moses (Toby Wallace). Her parents are less than thrilled with the budding relationship between the two. But when they realize that Moses is doing the terminally ill girl good, they take him in. But can a boy who is struggling enough with his own life take on the responsibility that comes with a relationship with Milla?

Milla Meets Moses, whose screenplay is based on the play of the same name by Rita Kalnejais, is a difficult film. Not because it deals with a heavy subject. No, its doing its thing in the dying teenagers find great love genre that has often been attempted, especially in recent years, the drama actually does very well, as the characters are rather maladjusted and the staging is a bit quirky. No, what makes the film difficult are individual elements that somehow seem very incongruous. One such point - which doesn't weigh particularly heavily, but still struck me negatively - is the fact that director Shannon Murphy clearly wants to swim against the tide, but then gets lost in such typical clichés as Milla suddenly wearing blue hair as a sign of rebellion.

Another point that clearly carries more weight is very undeveloped story elements. For that, I have to spoil a tiny bit. If you don't want to know anything else about the movie's content, you'd better skip this paragraph. Okay. For example, there's Moses' mother, who apparently wants nothing more to do with her older son and also wants to keep his younger brother away from him. In one scene, the latter also clearly turns his back on Moses - only to join him in happy harmony at a dinner with Milla's family one scene later. The same goes for the pregnant neighbor. Here, Murphy first builds up some tension between the woman, who is quite careless with her unborn child, and Henry. This ends rather abruptly, but a short time later she is something of a part of the family. It just doesn't fit.

Milla meets Moses has some good and also very strong moments. But there are just aspects that make it hard to see the story as comprehensible or to buy into the characters' actions. The film is cramped trying not to be mainstream. This may go down well with festival juries and the feature pages, but in the end leaves many viewers somewhat perplexed or even emotionless. And the strong ensemble and the essentially beautiful story don't really deserve that. All in all, however, there is still a somewhat hesitant: worth seeing!