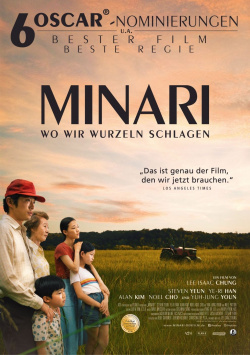 Minari - Where We Put Down Roots

In order to offer them a better life, Jacob (Steven Yeun) and his Korean-American family move from Los Angeles to a small farm in Arkansas. In the fallow land Jacob sees the big chance, what his wife Monica (Ye-Ri Han) sees completely different. She feels like a stranger here and is afraid that Jacob's plans might fail. The two children David (Alan Kim) and Anne (Noel Kate Cho) also have difficulties making friends with the new home. When grandmother Soon-Ja (Yuh-Jung Youn) arrives from Korea and David has to share a room with her, chaos seems perfect. But gradually a special bond is formed between Soon-Ja and her grandson that could also connect the rest of the family in this difficult situation...

"Minari - Where We Put Down Roots" is a wonderful drama about family roots, starting over in a foreign land, and overcoming prejudice. Director Lee Isaac Chung, himself the son of Korean immigrants, creates a pleasantly unagitated family portrait that skilfully avoids becoming too conventional or kitschy. Chung imbues the story with his own tone from the very beginning, which is largely responsible for making the whole thing work really well. The ending (which won't be given away here, of course), in which the titular plant "Minari", also known in this country as "Korean parsley" or "water celery", plays a supporting role, could so easily have become the biggest kitsch. How it managed to simply turn it into a beautiful piece of cinematic poetry is quite great art.

An important aspect of the film is also its visual language. The camerawork is great, perfectly capturing both Jacob's hope and Monica's fears in the landscape shots. The imagery supports the great acting of the entire ensemble, from which "The Walking Dead" star Steven Yeun and Oscar-nominated Yuh-Jung Youn particularly stand out.

"Minari - Where We Put Down Roots" is simply a wonderful film. Despite many dramatic moments, despite the many setbacks the family has to deal with, it is a very special piece of feel-good cinema that goes to the heart without ever laying it on too thick. It's a deeply life-affirming film that shows how important people's roots are and that it's entirely possible to replant them in a foreign land without losing one's origins. All it takes is hope, will and an open heart. For this beautiful work, there is clearly a: Absolutely worth seeing!

Cinema trailer for the movie "Minari - Where We Put Down Roots (USA 2020)"
Loading the player ...