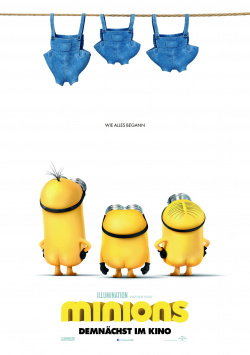 For thousands of years, the Minions have been on a quest to find the perfect boss. But whether they were dinosaurs, Neanderthals, commanders, or vampires, the Minions always unwittingly got rid of their villainous idols with their very special ways. At some point they retreated into an icy dwelling, where over time they became afflicted with an unspeakable boredom. Now it was up to Kevin, Stuart and Bob to save their Minion chambermates from absolute despair and find a new boss. The three brave Minions set off on their journey and end up in 1960s New York. Here they learn that a villain fair will take place in Orlando, where also chief villain Scarlet Overkill (voiced by Carolin Kebekus) will do the honors. Actually, wouldn't she be the perfect boss? But to get her interested in the Minions, Kevin, Stuart and Bob first have to complete a very special mission that will take them all the way to London and even turn the venerable monarchy upside down...

Since their first appearance in the animated hit I - Simply Incorrigible in 2010, the little yellow Minions have been an absolute cult. Whether in short films, on lunch boxes, t-shirts, bed linen, as a video game, comic or rag dolls - there is almost nothing that there is not from the Minions. So you might think they're almost a little too over-present and have lost their charm and wit because of it. But within minutes of the start of their first feature film of their own, Minions, it's clear that the cute yellow creatures, with their fantasy language and occasionally delightfully quirky sense of humour, are working as well as ever - if not better.

The beginning of the film is an extended version of the wonderful trailer, and shows the Minions in their desperate attempts over the course of millennia to find the right boss. Although you know most of the scenes just from the trailer, this nearly 10 minute sequence offers great laughs every second. This doesn't stop when Kevin, Bob and Stuart arrive in New York and flirt with fire hydrants or cause chaos in a well-known department store. It's only with the arrival at the villain expo that the extremely high gag density decreases a bit, as not all the ideas here are equally funny and some of the characters just come across as too over-the-top weird. No question, even here there are still enough moments in which you as a viewer will be shaken vigorously. But there are also smaller passages in which the broad permanent grin turns into a somewhat more relaxed smile.

When the action then moves to London and the admittedly very thin story heads towards its climax, however, the laugh muscles are again strained to the extreme. It's true that every now and then you get the feeling that the whole thing is a bit too chaotic and just too much of a good thing. But whenever a gag doesn't work, it's immediately followed by another good one, so that there's no time left for the small weaknesses of the film to have a negative effect on the overall impression.

What makes the Minions in general and this film in particular so successful is the fact that the humor has different levels, so that not only children but also adults have to laugh heartily about the capers of the little men. Thus, Minions is not just a children's film, but fun for the whole family, which even older viewers like to watch several times. And as long as the films in which they appear remain so fresh, charming, quirky, endearing and funny, there is no end in sight to the popularity of the Minions. Here's to that: BANANA - and of course a: Absolutely worth seeing!!!!