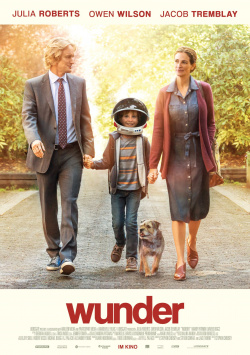 10-year-old August Auggie Pullman (Jacob Tremblay) is smart, funny and good-natured, has loving parents (Julia Roberts, Owen Wilson) and a sister Via (Izabela Vidovic) with whom he can go through thick and thin. Sounds like the perfect childhood? Not for Auggie, as a rare genetic defect has left his face completely disfigured. So far he has been home-schooled and only ventures outside hidden under his astronaut helmet. But all that is about to change, because the boy is finally going to lead a normal life and meet other children. Although he is afraid, Auggie is persuaded to go to a normal school class - without his astronaut helmet. But at first he remains an outsider at school, constantly being gawked at. But then he makes his first friends - but will they be able to last in everyday life?

The film adaptation of R. J. Palacios` acclaimed debut novel Wonder is itself a small wonder. The touching plea for courage, tolerance and friendship has so far grossed $250 million worldwide on a relatively small budget. Of course, the production is highly manipulative and pushes the tearjerker wherever it can. But somehow it all works very well. The film is simply beautiful and gives its audience a wonderful feeling of happiness. Particularly played by Jacob Tremblay (Room), but also by the other young actors and actresses, as well as by the professionals Julia Roberts and Owen Wilson very well, the film, which is infused with quiet humor, convinces especially on a dramaturgical level.

Because the story is not only told from Auggie's point of view. Rather, the narrative perspective changes again and again. Sometimes it is the little boy who lets the viewer share his fears, hopes and joys, then it is his sister Via who gets to tell how she deals with the fact that all her parents' attention is focused on her brother. Then it's Via's once best friend, who just seemed very shallow, who reveals why she's changed so much. And Jack, Auggie's first real boyfriend, is also given his own story arc.

By telling the events from different perspectives, the characters can be portrayed in a much more complex way than it first appears, which the film absolutely gains from on an emotional level as well. Sure, it's often laid on pretty thick. And especially towards the end, everything is viewed through rose-coloured glasses, suggesting that everyone - especially all children - are good, tolerant and open-minded people at heart. Oh, how nice it would be if that were the case in reality. But in the cinema it's allowed to be like that - after all, Wunder is not a documentary, but a very, very nice fairy tale, which wants to give its viewers a nice message: It's always worth looking behind the facade.

So if you can overlook a little bit of kitsch and permanent pressure on the tear gland and just want to be told a nice story that makes you feel good in your heart, this Wunder can be more than recommended. Absolutely worth seeing