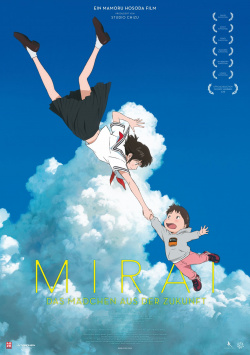 Mirai - The Girl from the Future

Ah, what wonderful years those were, with Kun's parents taking full care of the boy. All his parents' attention and all their love belonged to him. But this is over after 4 years. Kun's sister Mirai is born and suddenly everything revolves around her. Kun is desperate and angry. More and more he withdraws from his family and suddenly lands in a fantastic world beyond time and space - a world that makes him see his family with completely different eyes.

Mirai - The Girl from the Future is a really special anime film. It perfectly manages the balancing act between reality and (childish) fantasy. Director Mamoru Hosoda, who also wrote the screenplay, captures many moments that almost every viewer can recognize - whether as a child, or from a parent's point of view. They are small snapshots of the everyday life of young families, captured very true to life, sometimes humorous and sometimes very emotional. It's a bit overdone by the animations here and there, but that adds to the charm.

As the story progresses, the imaginative dream sequences take over more and more. At first, you wonder what the point of it all is. It's a bit weird what Hosoda brings to the screen here, but it's also intriguing and extremely involving. At some point, it finally reveals what the whole thing is aiming at. And at this point, at the latest, it becomes clear: children's fears and the search for their own place in the family have rarely been portrayed in such a playful, imaginative and true-to-life way.

Furthermore, the film enchants with enchanting animations that are so detailed that as a viewer you can literally lose yourself in the images and sometimes would like to pause the film to soak up the visual power of what is on the screen. Especially in the last act, the film shines with a visual ingenuity that can really only be discovered in anime. If you appreciate traditional animation and want to be told a truly beautiful story about the trials and tribulations of being a child, in addition to fascinating images, then you shouldn't miss Mirai - The Girl from the Future. Absolutely worth seeing!

Cinema trailer for the movie "Mirai - The Girl from the Future (Japan 2018)"
Loading the player ...