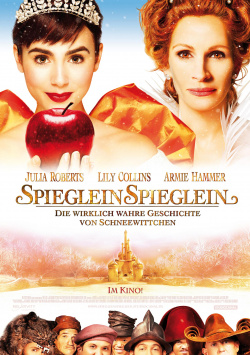 The fairy tale of Snow White and the Seven Dwarfs has already been filmed countless times. Still, fairy tale fans will be treated to not one, but two new interpretations of the familiar material in 2012. First up is Mirror Mirror by Tarsem Singh, who takes a rather offbeat humorous approach to retelling the tale. And those familiar with Tarsem Singh's previous films know that one thing in particular is to be expected here: extremely colourful extravaganza.

For whether in the thriller The Cell, the fantasy fairytale drama The Fall or War of the Gods, Singh has always indulged his penchant for outlandish costumes, whimsical sets and unconventional décor. And Mirror Mirror is no exception. And so the familiar story is actually told in a completely new guise. In terms of content, however, little new is offered: The evil queen (Julia Roberts) can't stand the fact that her 18-year-old stepdaughter Snow White (Lily Collins) is supposed to be more beautiful than she is. It's too unfair, after all, the girl's flawless skin has never been exposed to direct sunlight. And yet, the queen won't let her magic mirror tell her that it's not her beauty that outshines everyone else. When handsome Prince Andrew Alcott (Armie Hammer), who not only pleases the queen's eye but could also fill the kingdom's empty coffers as her husband, casts an eye on the hated stepdaughter, the queen has only one solution: Snow White must go. Although the girl narrowly escapes certain death, her fate in the gloomy forest seems finally sealed. But then she meets the Seven Dwarfs, who take Snow White into their midst after initial doubts. Together with her new cronies, the outcast forges a plan to finally push the evil queen from her throne and bring joy and prosperity back to the kingdom. But of course the nasty stiff mother doesn't let herself steal the crown from her head that easily...

Admittedly, the visual realization of the fairy tale takes a little getting used to at first. Especially the partly very colorful costumes and the deliberately artificial looking sets are a bit beyond the usual viewing habits. And also in terms of humor, the film goes its own, weirdly overdone ways. As a viewer, you first have to get used to this. But as soon as you do, there's nothing standing in the way of an enjoyable cinematic fairy tale. However, there is another problem.

Because it never really becomes clear to which audience the colorful fun is actually trying to address. For one thing, some of the gags are very obviously designed for a young audience, while other, more cryptic jokes will probably only be laughed at by adult viewers. And even though the production is bursting with endearing and clever ideas, it just seems a bit inconclusive overall, which leaves a bit of a sallow aftertaste in the end.

The actors can't be blamed for this, though. They are all with such great enthusiasm in the matter, that the fun factor of the film is significantly increased. Especially Julia Roberts plays the evil queen with the fanatical youth mania with a whimsical over-excitedness, which consoles over some hangs of the production. But Armie Hammer (J. Edgar) and Phil Collins' daughter Lily, with her Bert-memory eyebrow, also do their part to make Mirror Mirror such an entertaining version of the popular fairy tale.

But the real stars of the film are the Seven Dwarfs, portrayed here as petty crooks cast out of the community. The scenes in which they rob the prince or try to prepare Snow White for the fight against the queen are just great and certainly belong to the comedic highlights of the cinema fairy tale.

So there is plenty to laugh about, and also a lot of fodder for the eyes. You should just like it a little extravagant, colorful and overdone to really have fun with the real true story of Snow White. Because at the latest when the whole thing culminates in a solid Bollywood finale at the end, it should be clear to even the last viewer that this is truly no ordinary fairy tale film. Worth seeing