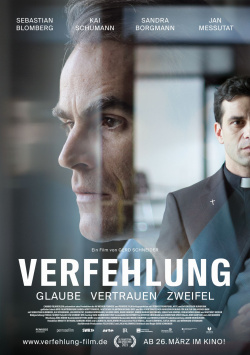 For four years, Catholic priest Jakob Völz (Sebastian Blomberg) has worked as a prison chaplain. But now it's time for a new challenge, which Jakob plans to take on in a few weeks. It's an exciting time, during which he finds special support from his fellow priest friends Dominik (Kai Schumann) and Oliver (Jan Messutat). So close to his career advancement, Jakob is convinced that his faith and the close bond with his friends will help him make a difference in the Catholic Church. But then the unthinkable happens: Dominik, of all people, is arrested on suspicion of sexual abuse. Of course, Jakob is convinced that his friend is innocent. But when he meets the alleged victim and her mother (Sandra Borgmann), he begins to have doubts. Torn between his loyalty to his friend and the church and his sense of justice, Jakob begins to ask uncomfortable questions. The answers, however, put his faith to a very hard test...

With the drama Verfehlung, director Gerd Schneider has used an extremely difficult and explosive subject matter, which he has realised with oppressive intensity. He deliberately avoids big shock moments and an overly striking reappraisal of the events. Instead, he captivates the audience with an oppressive atmosphere of helplessness and creates enormous tension with deliberate restraint. The dichotomy that Jacob goes through is also felt by the viewer, with initial doubts turning into incredulous rage by the end. What is pleasant, however, is that Schneider does not lapse into a general condemnation of the church, but tries to show as neutrally as possible how complex the processes are that are perceived by outsiders as a collective cover-up. He tries to find out why it can be that monstrous crimes like abuse are hushed up by the church. Achieving that without excusing these events is the great feat of this drama.

Misconduct, however, is not only superbly written and directed, but also very well acted. Sebastian Blomberg in particular is beyond reproach as a priest shaken in his faith. His intense acting makes it clear how the conflict of faith and loyalty versus a sense of justice can lead to a paralyzing speechlessness. Through Jacob, the viewer gets a glimpse of events from within the fabric of the church, which makes this film not only hugely important but also, precisely, tremendously upsetting.

There is no question that abuse in any form is condemned. Nevertheless, Misconduct is not a film against the Church, which was also confirmed by representatives of the Catholic Church present at the press screening. Gerd Schneider's drama stimulates discussions that should be held both inside and outside the church. The film is not light fare, not a relaxing entertainment film. It is a work that not only demands the viewer emotionally. As a result, it might have a hard time reaching the wide audience it actually deserves. But for those who want to grapple with this difficult subject matter and see how such a story can be told in a completely unplotted, yet engaging and effective way, this intense piece of German actor's cinema is not to be missed. Worth seeing

Cinema trailer for the movie "Misconduct (Deutschland 2014)"
Loading the player ...