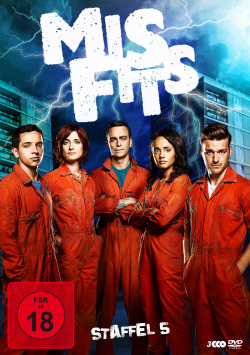 Content: It's been a year since a mysterious thunderstorm hit London, endowing some teenagers with supernatural powers. But life for the Misfits is far from normal, even after all these months. On the contrary - it's getting more and more turbulent. For example, after risking his own life to save Jess (Karla Crome), bartender Alex (Matt Stokoe) has come through the dangerous lung transplant just fine. But foolishly, he's been given the lungs of a man who can take away others' powers through sex. And so it's not long before Alex is constantly being asked to fuck others to stop them suffering from their less than pleasant powers. He's even said to have a go at a turtle. Finn (Nathan McMullen) briefly becomes a demon, while Rudy 2 (Joseph Gilgun) joins a support group for people with supernatural powers. Abbey (Natasha O`Keeffe), who can`t remember her past since the storm, actually finds out who she is - which doesn`t really make her life any easier. Meanwhile, Rudy 1 and Jess are getting closer. But when a woman who can knit her visions of the future gives her a sweater with what appears to be a vision concerning the two of them, their young happiness is also in danger of falling apart - with fatal consequences for the future...

Misfits is now entering its fifth and final season after a somewhat weaker fourth. No one from the original cast is now on the show, and much of the new Misfits only joined last season. Admittedly, this takes away some of the potential power of the series finale. After all, saying goodbye to characters you've only just met, so to speak, and who seemed more like clones of the former main characters, especially at the beginning, is of course far less emotional than having to say goodbye to characters you've been with from the beginning.

But apart from that, the season is quite successful overall. Thereby whimsical-amusing moments regularly alternate with dark and also very serious scenes. For example, one episode deals with seriously ill teenagers who have lost all hope in life. And the troop of new superheroes that forms around Rudy 2 also has very unpleasant, tragic consequences for the Misfits. Once again, the creators try to mix the normal fears, worries and desires of teenagers with elements of fantasy and horror. While this doesn't work quite as well as it did in season 1, it still stands out from the crowd of other teen series. Misfits is exciting, funny, nasty, dirty and very direct. It's not always politically correct, and it doesn't conform to the typical glossy aesthetic that so many other series for the youth demographic have.

For fans of the series, it would have been nice if at least some of the original cast had stopped by for the finale. Then the final episode might have felt more like a concluding series finale and not just a good season finale. Still, it has to be said quite clearly that the creators managed to bring the series to a good and conciliatory end with the final episodes. And so the last scene actually manages to give you goosebumps and a little bit of melancholy. Thus applies to this fifth and final season: For all Misfits fans, even for those who were dissatisfied with season 4: Absolutely worth seeing!

Picture + Sound: As with the first four seasons, the audiovisual realization can also convince quite with the final episodes. The image is very clean and, in addition to the very atmospheric color scheme, also shows a pleasantly high level of detail sharpness, which only shows small weaknesses in very dark scenes. The audio is present in the German soundtrack in a good, sometimes pleasantly lively Dolby Digital 5.1 mix. While the dialogues sound rather centrally mixed, smaller sound effects provide again and again for some movement in the surround area. And during the soundtrack, the basses also come into play very well every now and then. Good!

Extras: As a bonus, the third disc features a two-part behind-the-scenes look (approx. 20 min.) consisting of interviews and brief looks at the filming and effects. For the finale, fans certainly would have liked a little more, but still, here's a satisfied: good!

Conclusion: The finale of Misfits is a somewhat double-edged affair. On the one hand, after replacing all the original cast members, the show just isn't the same anymore, and still, you would have been happy to see some old faces stop by for the finale. On the other hand, the final season is qualitatively much better than the rather weak fourth season, which ultimately brings the series to a conciliatory and somehow also worthy conclusion. Even if the quality of the first seasons is not quite reached, this last, technically well converted DVD box for fans is then nevertheless: Absolutely recommendable!