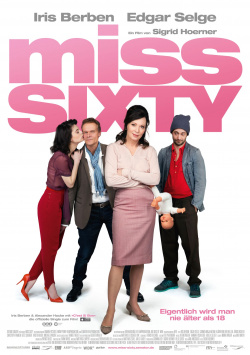 For forty years, molecular biologist Luise Jansen (Iris Berben) has done excellent work in her profession. Only in dealing with her fellow men, the single woman is a real disaster. And so it's hardly surprising that her colleagues aren't exactly sad when Luise is pushed into early retirement by her boss and ex-lover Bernhard (Götz Schubert) on her 60th birthday. But that's not all: as she tries to come to terms with her new living situation in the city park, she meets gallery owner Frans (Edgar Selge), who is in urgent need of first aid after a nasty case of lumbago. Reluctantly, Luise drives the man, who has been ravaged by youth, to the hospital, hoping never to see the unsympathetic fellow again. But when she makes a decision a little later that will change her life completely, fate brings the two quarrelsome men together again. And suddenly retirement for Luise is anything but quiet.

Miss Sixty has two very strong arguments on the plus side: on the one hand, a truly original idea, on the other hand, a strong leading actress, who as a disgruntled early retiree against her will may finally once again show comedic best form. Director Sigrid Hoerner, who makes her debut as a feature film director with this comedy, gives Iris Berben enough room to develop the various facets of Luise - whereby her not always friendly nature towards her fellow human beings provides the most amusing moments of the film. Edgar Selge is also very well cast as Frans, who is blinded by the youth craze, but his character is a bit too overdrawn here and there to be fully convincing.

Despite a good basic idea and a wonderful leading actress, Miss Sixty can only convince in parts, though. While some scenes are extremely funny staged and well written, other moments seem a bit too flat or too pale to provide good laughs or at least an amused smile. Most of the time the staging just barely misses the mark and reveals that this comedy couldn't have been just nice, but really good. To the film's credit, though, it does make an effort to address some very serious topics like loneliness, fear of getting older and late motherhood. These are served up in a way that makes you think about them as a viewer, without dragging down the mood in the more sad or thoughtful moments.

In the mass of films in recent months that deal with the subject of aging and thus also want to appeal primarily to audiences over 50, Miss Sixty doesn't really get lost. But despite a very strong Iris Berben the comedy doesn't manage to stand out either. And that's kind of a damn shame considering the many successful aspects. Nevertheless: all fans of Iris Berben and viewers who have not given up the belief that you are never too old to find the great love, Miss Sixty can be confidently recommended with small restrictions!