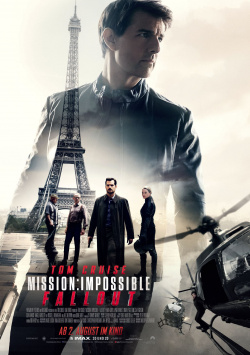 Ethan Hunt (Tom Cruise) embarks on another impossible mission. After he and his team botch the delivery of black-market, weapons-grade plutonium they're supposed to be keeping safe, they now have little time to prevent the plutonium from falling into the wrong hands. Together with CIA agent August Walker (Henry Cavill), Ethan, Benji (Simon Pegg) and Luther (Ving Rhames) set out to get the dangerous real back, which is now in the possession of the mysterious White Widow (Vanessa Kirby). In order to not blow Ethan's cover in the process, he is presented with quite the challenge: He is to help his nemesis Solomon Lane (Sean Harris), of all people, escape.

Mission: Impossible - Fallout is action cinema at its finest. The plot, of course, plays only the supporting role. But let's face it: is it really supposed to be any different? Who wants to see a completely cerebral Mission: Impossible movie with less action? Now, of course, it can be argued that action movies are a dime a dozen and that a sixth installment in the franchise is therefore completely unnecessary. However, this argument can be quickly refuted. Because these days, a movie like Mission: Impossible - Fallout is a real rarity. This is due to the fact that relatively few CGI effects were used here. Because Tom Cruise, even in his mid-50s, doesn't mind doing all his own stunts. He simply spends a year and a half learning to fly a helicopter so that he doesn't have to shoot a spectacular aerial chase in front of a green screen. And there's also hobbling along bravely when he breaks his ankle in a daring jump.

The fact that the action feels real is what makes the film so successful. A bathroom brawl alone is so magnificently choreographed and executed that as a viewer, you're happy to overlook the occasional moment when the laws of logic are momentarily suspended. But the movie isn't carried by the action alone. The story may be quite thin in itself, but it is also quite exciting and thrillingly realized.

And then, of course, there are the characters, who by now have matured so well that you are simply happy to see them again. This is true not only for Ethan, Benji, and Luther, but in this film, Isla Faust as well. Rebecca Ferguson returns after her successful debut in part 5 and proves that she is a perfect addition to the team - even if she seems to work for the opposite side this time.

Some scenes may be a little thick and especially the big finale is perhaps a little too much of a good thing - especially since it should really be clear to every viewer how the whole thing ends. But that doesn't change anything about the extremely high entertainment value of the movie. With breathtaking action, a lot of suspense and a good portion of humor, Mission: Impossible - Fallout is best popcorn cinema, which really does not let boredom arise for a second. And even if the end actually offers a round conclusion, a reunion with Ethan Hunt and his team can not come soon enough after this successful mission. Absolutely worth seeing!